LAS VEGAS, Jan. 8, 2020 /PRNewswire/ -- At CES 2020, NOLO VR has launched their NOLO CV1 Air motion tracking kit that is compatible with HUAWEI VR Glass to provide the most "portable" 6DoF VR solution. This lightweight VR headset combined with 6DoF interactive capabilities gives it the cutting-edge promise of mobile VR. Currently, HUAWEI VR Glass and NOLO CV1 Air is being sold in mainland China and is preferred by Chinese mobile network operators in the Cloud VR services. 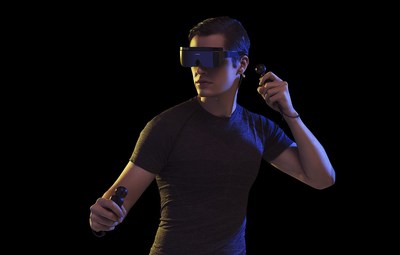 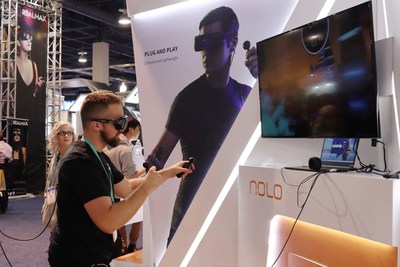 The weight of the NOLO CV1 Air headset marker and HUAWEI VR Glass headset is less than 200g. The lightweight and portable glasses type VR form is in sharp contrast to the thickness and heaviness of most VR interactive devices on the market.

NOLO CV1 Air consists of three components: a base station, a headset marker and two controllers. It is lightweight and portable, with a strong performance. The positioning precision is +/-2mm and the positioning latency is less than 20ms.

Compared to the previous generation of NOLO CV1, apart from the base station and the interactive controllers that have been optimized for the HUAWEI VR Glass, the headset marker also has been greatly modified in terms of its circuit structure and industrial design. With the Micro-USB cable connection removed and the headset marker positioning receiver modified, it is in a thin and crescent shape with less than 20g weight that makes it almost unnoticed when paired with the HUAWEI VR Glass.

From the user's perspective, lightweight, portable, easy to use, and 6DoF interaction are their core requirements. The glasses type VR headset meets the basic needs of the users. This portable and compact form of VR headset that tethers to a smartphone is easily accepted by the public. The entry of mobile phone manufacturers may make VR move faster to the consumer market.