A team of UK students has been hailed for 'exceeding expectations' after finishing third in the FIRST Global Challenge in Mexico - a STEM-inspired international robotics competition. 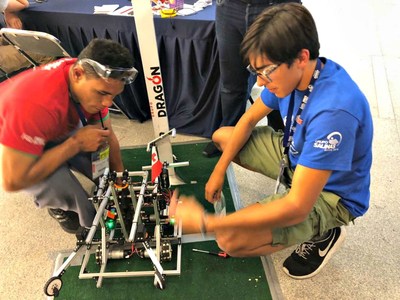 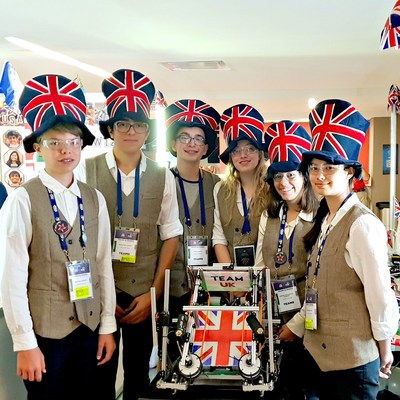 The impressive talents of the team - six high school students selected by FIRST Tech Challenge UK & Ireland - came to the fore during three days of competition over August 16-18, which featured teams from more than 165 nations - including 11 all-female teams.

Team UK's Omar Ben-Gacem, Patrick Jordan, Ashleigh Rudesill, Zarina Choudhari-Stewart, Mackensie Kim and Dom Alberts all demonstrated they are engineers of the future after designing and programming their own robot, using a standard kit used by all teams, to carry out a series of challenges in the finals.

Such is the magnitude of the tournament, held in the Arena Ciudad de Mexico in Mexico City, it is dubbed the 'Robotics Olympics' and secured the presence of Mexican President Enrique Peña Nieto as well as being broadcast live online.

The tournament format sees nations put into alliances of three, with Team UK joining forces with Georgia and Qatar for the event. Collectively, the nations worked together on the challenges set by the organisers with the aim of outscoring their rival alliances in the various rounds.

Their success carried them through the four group stages and all the way to the semi-finals, where their run eventually came to an end as the trio lost to the combined talents of the Maldives, Iceland and Colombia. The overall winners were Romania, Singapore and Germany.

Muktar Ali, chief operating officer of FIRST Tech Challenge UK & Ireland, said: "The goal that we set Team UK was a finish in the top quarter of all participating teams. The team exceeded all our expectations in coming third.

"To us, it wasn't just about how they performed, there was greater emphasis on them meeting other students from around the world, enjoying the opportunity to make friends, learn about collaboration and to takeaway memories that will live with them forever. There are few occasions where so many people from across the world are present at a single event to achieve this.

"FIRST Tech Challenge UK is extremely proud to have supported the team in their journey to Mexico to compete in the FIRST Global official competition."

The FIRST Global Challenge, is a not-for-profit organization founded to promote science and technology leadership and innovation in young people from all nations through the sport of robotics.

The over-arching principle of the FIRST Global Challenge is to ignite a passion for STEM amongst young people across the world.

On a wider context it is looking to bring young people from across the world together to foster understanding and cooperation and to use their abilities to solve the future problems faced by the planet.

FIRST Global founder and STEM advocate Dean Kamen said: "I've learned through FIRST that if we teach the world's young people the common language of STEM, they'll learn how to work together across cultural and religious differences.

"Through the excitement of an Olympic-style sporting event, the FIRST Global Challenge is uniting students around the world to solve the greatest problems we face as a global community."

FIRST® Tech Challenge UK & Ireland is a charity on a mission to transform our relationship with STEM (Science, Technology, Engineering, and Maths) - breaking down learning barriers and equipping young people with the technical and life skills they need to become the innovators of tomorrow. For more information go to FIRST Tech Challenge UK & Ireland website, Facebook, Twitter and You Tube pages.