BERLIN, Nov. 28, 2019 /PRNewswire/ -- One hundred years ago, Jewish theatre-maker Max Reinhardt established the Great Theatre. Today, in its place in the Berlin district of Mitte, stands the imposing building known worldwide as the Friedrichstadt-Palast. Reinhardt lost his chance to influence Germany because of the Nazis. On the 29th of November, the theatre's 100-year anniversary, Europe's largest show palace is sending a powerful signal against anti-Semitism. On Wednesday, Director Dr Berndt Schmidt hoisted a commanding flag in front of the building which featured the Star of David and the inscription 'Jewish Roots Since 1919'. 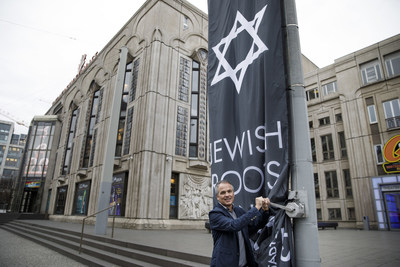 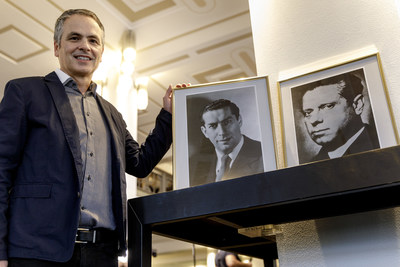 After 1933, Judaism became a question of life and death. We want to clearly acknowledge our Jewish roots," emphasized Dr Schmidt. The two other founding fathers of the theatre, architect Hans Poelzig and director Erik Charell, also suffered under National Socialism; they too lost their chance to influence this country at the hands of the Nazis.

In the 100 years since its foundation, the palace has lived through recent German history – from the Golden Twenties and National Socialism, through the Second World War to the division of Berlin and German reunification.  "We carry this legacy within us," said Dr Schmidt. "Against the background of our history, it has become clear to us that freedom is a precious good – one which can disappear faster than we think. That is why we learn from our history: to stand together for freedom, democracy and diversity."

"We want to set up a sign of solidarity for Jewish life in Germany," said the director, particularly with a view to the events of 2019. The 55-year-old stressed that the Friedrichstadt-Palast stands with minorities out of conviction. Dr. Schmidt referred to the extreme right-wing terrorist attack in Halle in October, which targeted a synagogue on the holiest day of the year in the Jewish faith.

For years now, the Friedrichstadt-Palast has been setting up clear signs against discrimination. The Palast no longer invites ambassadors from countries where there are laws against homosexuality to its premieres. Director Schmidt also caused a stir in 2017 when, after the entry of the AfD (Alternative for Germany) into German parliament, he spoke out emphatically against discrimination of any kind. At the time, the consequences were serious: the theatre was the victim of a bomb threat and had to be evacuated along with almost 2,000 guests. Dr Schmidt also received death threats.

700,000 guests per year, the Palast is now the most visited theatre in Berlin.