NEW YORK, June 12, 2018 /PRNewswire/ -- The Howard Hughes Corporation® (NYSE: HHC) announced today that it has acquired the property at 250 Water Street in Lower Manhattan from Peck Slip Associates, an entity controlled by the Milstein family. The one-acre site, currently used as a parking lot, encompasses a full city block bounded by Peck Slip, Pearl Street, Water Street, and Beekman Street. The company purchased the site for $180 million plus closing costs, consisting of an initial payment of $53 million and a mortgage for the balance. The financing has an initial interest-free term of six months, with three six-month extension options at a rate of 6% per annum.  The second and third extension options each require a $30 million paydown. 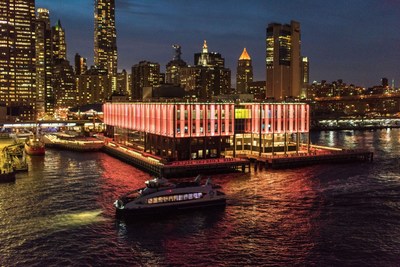 The acquisition is in addition to the approximately 450,000 square feet of property and a joint venture interest in a 66-room Mr. C hotel that together span several city blocks and comprise The Howard Hughes Corporation's interest in the Seaport District.

"Situated at the entrance to the Seaport District, the property at 250 Water Street is a valuable addition to our concerted efforts in the ongoing revitalization of the neighborhood," said Saul Scherl, President of the New York Tri-State Region, The Howard Hughes Corporation. "This acquisition represents another major step forward in making the Seaport District a vibrant destination and an anchor of the rapidly growing Lower Manhattan community."

The Milstein family acquired the site in the 1970's. Howard Milstein said, "We are very pleased to have been able to complete this transaction and wish The Howard Hughes Corporation great success."

The company's vision for the site is currently in the initial planning stages and will be announced at a later date.

About The Howard Hughes Corporation®The Howard Hughes Corporation owns, manages and develops commercial, residential and mixed-use real estate throughout the U.S. Its award-winning assets include the country's preeminent portfolio of master planned communities, as well as operating properties and development opportunities including: The Seaport District in New York; Columbia, Maryland; The Woodlands®, The Woodlands Hills, and Bridgeland® in the Greater Houston, Texas area; Summerlin®, Las Vegas; and Ward Village® in Honolulu, Hawaiʻi. The Howard Hughes Corporation's portfolio is strategically positioned to meet and accelerate development based on market demand, resulting in one of the strongest real estate platforms in the country. Dedicated to innovative placemaking, the company is recognized for its ongoing commitment to design excellence and to the cultural life of its communities. The Howard Hughes Corporation is traded on the New York Stock Exchange as HHC. For additional information visit www.howardhughes.com.

About Seaport District NYCThe Seaport District is New York's original commercial hub, located on the East River in Lower Manhattan with unparalleled views of the Brooklyn Bridge, the Statue of Liberty, and the city skyline. An essential part of the city for over 300 years, the re-envisioned Seaport District will continue to function as a community anchor and "port of discovery" for the rapidly growing population of Lower Manhattan. The Howard Hughes Corporation® is leveraging the Seaport's history as the birthplace of innovation as it transforms a district spanning several city blocks, creating approximately 450,000 square feet of dynamic culinary, fashion, entertainment and cultural experiences.

Highlighting the revitalized Seaport District is the new Pier 17, poised to become an iconic entertainment destination with a 1.5-acre rooftop that will serve as a year-round community amenity, featuring a restaurant, outdoor bars and a venue for cultural and special events, including the Pier 17 Rooftop Concert Series in partnership with Live Nation. The Pier Village will include waterfront restaurants from culinary powerhouses such as Andrew Carmellini, David Chang of the Momofuku Group, Helene Henderson of Malibu Farm, and Jean-Georges Vongerichten. Pier 17 is home to ESPN's new live broadcast studios.

The Seaport District will be home to the only U.S. location of Carla Sozzani's pioneering experiential concept store 10 Corso Como, and to a 50,000-square-foot food hall by Jean-Georges in the restored Tin Building. Also located at the Seaport District is Manhattan's first iPic Theater, the highest grossing location in the premier cinema operator's portfolio. For additional information, visit SeaportDistrict.NYC.

Safe Harbor StatementStatements made in this press release that are not historical facts, including statements accompanied by words such as "will," "believe," "expect," "enables," "realize", "plan," "intend," "assume," "transform" and other words of similar expression, are forward-looking statements within the meaning of the Private Securities Litigation Reform Act of 1995. These statements are based on management's expectations, estimates, assumptions, and projections as of the date of this release and are not guarantees of future performance. Actual results may differ materially from those expressed or implied in these statements. Factors that could cause actual results to differ materially are set forth as risk factors in The Howard Hughes Corporation's filings with the Securities and Exchange Commission, including its Quarterly and Annual Reports. The Howard Hughes Corporation cautions you not to place undue reliance on the forward-looking statements contained in this release. The Howard Hughes Corporation does not undertake any obligation to publicly update or revise any forward-looking statements to reflect future events, information or circumstances that arise after the date of this release.