LAS VEGAS, Sept. 18, 2018 /PRNewswire/ -- The Howard Hughes Corporation®, owner of the Las Vegas 51s®, announced today a two-year Player Development Contract (PDC) between the Las Vegas 51s and the Oakland A's. The Las Vegas 51s, the city's professional Triple-A baseball team and a member of the Pacific Coast League (PCL), will begin the 2019 season in their new stadium the Las Vegas Ballpark, which is currently under construction in Downtown Summerlin®. 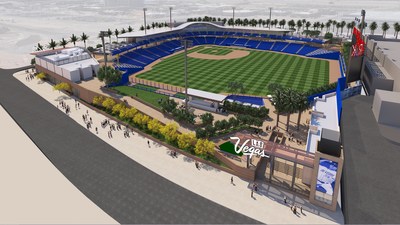 "This announcement marks yet another significant new chapter in our development of Downtown Summerlin into a dynamic sports and entertainment destination," said David R. Weinreb, CEO of The Howard Hughes Corporation. "Upon completion of the Las Vegas Ballpark, fans will have the opportunity to enjoy America's favorite pastime in a new state-of-the-art stadium with a new Major League affiliation, all in a vibrant walkable environment."

"The significance of today's announcement is another huge win for Southern Nevada baseball fans and the Las Vegas community in general," said Kevin T. Orrock, President, Summerlin®, The Howard Hughes Corporation. "We could not be more proud of what we are creating in Downtown Summerlin, and today's announcement adds yet another exciting element to the growing sports legacy of our city and our community."

In recent years, professional sports have dominated the headlines in Southern Nevada for many reasons, to which Summerlin is no exception. The new Las Vegas Ballpark, which is under construction adjacent to the City National Arena, the practice facility of the Vegas Golden Knights, is creating a true sports destination in the heart of the community and acting as a catalyst for further development.

"It is an incredibly exciting time to partner with the Las Vegas 51s," said Athletics Executive VP of Baseball Operations Billy Beane. "Their ownership group is committed to providing a first-class environment for our players, which includes the grand opening of the Las Vegas Ballpark for the inaugural season of our affiliation. We're looking forward to working closely with Don Logan and his staff as we all work towards putting a championship club on the field."

Downtown Summerlin is at the forefront of a vital urban development serving the entire Las Vegas Valley. Building the Las Vegas Ballpark in the heart of Downtown Summerlin is symbolic of the focus that The Howard Hughes Corporation has placed on creating memorable experiences and making entertainment and culture a central component of its communities.

"We are excited to have the Oakland A's as our new Major League affiliate," 51s President/COO Don Logan said. "The A's have enjoyed great success at the Triple-A level with their minor league system, which has been second to none. This will be a great situation for our fans to watch top prospects in the A's system, as well as players on Major League rehabilitation assignments to showcase their talents in the Las Vegas Ballpark."

About The Howard Hughes Corporation® The Howard Hughes Corporation owns, manages and develops commercial, residential and mixed-use real estate throughout the U.S. Its award-winning assets include the country's preeminent portfolio of master planned communities, as well as operating properties and development opportunities including: The Seaport District in New York; Columbia, Maryland; The Woodlands®, The Woodlands Hills, and Bridgeland® in the Greater Houston, Texas area; Summerlin®, Las Vegas; and Ward Village® in Honolulu, Hawai'i. The Howard Hughes Corporation's portfolio is strategically positioned to meet and accelerate development based on market demand, resulting in one of the strongest real estate platforms in the country. Dedicated to innovative place making, the company is recognized for its ongoing commitment to design excellence and to the cultural life of its communities. The Howard Hughes Corporation is traded on the New York Stock Exchange as HHC. For additional information visit www.howardhughes.com.

About The Las Vegas 51sThe Las Vegas 51s have the proud distinction of being the longest enduring franchise in the history of professional sports in the state of Nevada. The 2018 campaign marked the 36th season in the Silver State for the 51s, proud members of the Pacific Coast League. The Stars/51s have reached the 300,000 mark in "home" attendance at Cashman Field in 36 consecutive seasons (1983-2018). The 51s are the Triple-A affiliate of the Oakland Athletics and the franchise won the PCL championship in 1986 and 1988. For more information, visit www.milb.com/las-vegas/