COLUMBIA, Md., Sept. 13, 2018 /PRNewswire/ -- OPUS Merriweather®, the bold, multifaceted festival that combines art, sound, technology and taste into a surreal sensory journey , will return on Saturday, October 13, from 5:00PM to 11:00PM. Attracting more than 15,000 visitors in 2017 to Downtown Columbia's Merriweather District, the pioneering art and music festival will once again transform Symphony Woods and Merriweather Post Pavilion into an immersive atmosphere of discovery, imagination and wonder. 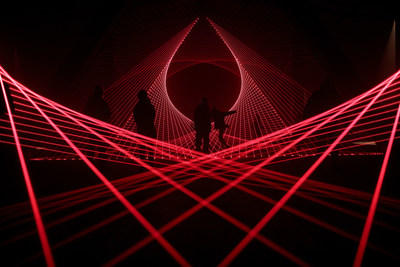 "As we continue to transform Downtown Columbia and the Merriweather District into a vibrant regional hub for technology, art, and commerce, creative and cultural programming are pillars of our placemaking process," said David R. Weinreb, CEO of The Howard Hughes Corporation. "OPUS is a visionary festival that embodies our commitment to innovation and builds upon the diverse and forward-thinking legacy of Jim Rouse and Downtown Columbia."

Curated and produced by Brooklyn-based creative studio Wild Dogs International, OPUS Merriweather's line-up features an eclectic mix of generations, styles and backgrounds as rich as the diverse history of Columbia itself, with over 40% percent of artists hailing from outside the United States.

Anchored by the desire to produce visually stunning, memorable stage performances, OPUS is pleased to announce the participation of some of today's most exciting musical minds, who will perform in five distinct performance spaces throughout Merriweather Post Pavilion and Symphony Woods:

"When we encountered Columbia, Merriweather Post Pavilion and Symphony Woods, we were immediately intrigued by its legacy as a fertile and timely place for investigation of the present and a lens into the future of art, music and culture," said Ken Farmer, founder of Wild Dogs International. "In today's world of screens and selfies, we were seduced by the forest's potential as a surreal theater of wonder and curiosity."

OPUS provides a forest-full of opportunities for discovery including seven new commissions and an array of dynamic art installations and stages spread across the entire fifty acres of Symphony Woods.

First release tickets are $10 and free for children under 12 years of age. Guests may purchase tickets at opusmerriweather.com.

About The Howard Hughes Corporation® The Howard Hughes Corporation owns, manages and develops commercial, residential and mixed-use real estate throughout the U.S. Its award-winning assets include the country's preeminent portfolio of master planned communities, as well as operating properties and development opportunities including: The Seaport District in New York; Columbia, Maryland; The Woodlands®, The Woodlands Hills, and Bridgeland® in the Greater Houston, Texas area; Summerlin®, Las Vegas; and Ward Village® in Honolulu, Hawaiʻi. The Howard Hughes Corporation's portfolio is strategically positioned to meet and accelerate development based on market demand, resulting in one of the strongest real estate platforms in the country. Dedicated to innovative placemaking, the company is recognized for its ongoing commitment to design excellence and to the cultural life of its communities. The Howard Hughes Corporation is traded on the New York Stock Exchange as HHC. For additional information visit www.howardhughes.com.

About Wild Dogs InternationalWild Dogs International is a Brooklyn-based creative studio that collaborates with world-renowned artists and commissioners to create site-specific experiences from large-scale festivals to artist-led interventions. Their work has been featured in the Venice Architecture Biennale, the New Museum, the Broad Museum, Palais de Tokyo, and underutilized public spaces throughout the world. For additional information about what we're doing, visit wilddogsinternational.com.

About Downtown ColumbiaA development of The Howard Hughes Corporation®, Downtown Columbia is located at the center of Columbia, MD, one of the first master planned communities in the U.S. founded by legendary developer James W. Rouse in 1967. Conveniently located between Washington, DC and Baltimore, Columbia is comprised of 14,000 acres including ten completed residential villages and a deep pipeline of commercial development opportunities within its Downtown. At full buildout, the redevelopment of Downtown Columbia will include three new and reconfigured neighborhoods—Merriweather® District, Lakefront District and Central District—and feature more than 14 million square feet of mixed-use development comprised of 4.3 million square feet of commercial office space, 1.25 million square feet of street retail, 6,244 residential units, and 640 hotel rooms, as well as cultural and civic spaces including public parks, trails and more.

The underdeveloped core of Columbia became the subject of an extensive five-year process that culminated with the passage by the Howard County government of the Downtown Columbia Plan in 2010, a guide to creating a vital area in which residents can live, shop, work, entertain, exercise, and enjoy cultural opportunities in an enriched natural setting. More information is available at howardhughes.com/properties/downtown-columbia.