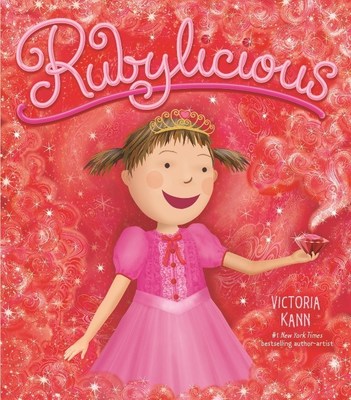 In this all-new picture book, Pinkalicious is searching for stones for her rock collection when suddenly—POOF!—out pops a surprise! Rocky is here to grant Pinkalicious and her brother, Peter, one wish, and one wish only, so they must choose wisely. Should they wish for a pile of sweets? Or the ability to fly? Or maybe a castle with a fire-breathing dragon? But are any of those things good enough to be their very best, most special wish in the whole wide world? And what will happen to Rocky after they make their wish? With themes of generosity and selflessness, this gem of a book looks at how being selfless can be its own best reward.

"It is truly an honor for me to be able to write and illustrate the Pinkalicious book series," says author Victoria Kann. "I am so grateful that I have the opportunity to create stories, characters, and art that children connect with. I hope that readers will find joy, humor, comfort, and inspiration with my newest picture book, RUBYLICIOUS, which is about overcoming fear, being generous, and discovering a wish that is truly meaningful."

"As the publishers of Victoria Kann's Pinkalicious series for over fifteen years, we're delighted to present the latest addition to the series, RUBYLICIOUS! Joyous, playful, and as imaginative as ever, it opens a door to a theme that children and parents can explore together—the importance of kindness," says Antonia Markiet, Editorial Director, HarperCollins Children's Books.

With more than 30 million books sold since the series launched in 2006 and over 109 weeks on the New York Times bestseller list, the Pinkalicious franchise remains a huge blockbuster hit. The series has been adapted into a popular live stage musical, and, in February 2018, Pinkalicious went on to become an equally successful TV show on PBS called Pinkalicious & Peterrific. The TV show is in the top 3 of all PBS Kids shows and currently reaches more than 2.86 million kids ages 2-8.

In Celebration of The 50th Anniversary of Cat Stevens's Iconic...