PYEONGCHANG, South Korea, Feb. 20, 2018 /PRNewswire/ -- Since arriving in South Korea to cover the Olympic Winter Games PyeongChang 2018, Aaron Bauer, a reporter with Around the Rings (ATR) had been unable to sleep properly due to jet lag after the long journey and exhaustion caused by his work. When he visited the Korean Medicine Center in Gangneung Media Village and explained his problem, the Korean Medicine doctor administered acupuncture. After his very first acupuncture session, Bauer wrote, "I've slept soundly ever since. Unfortunately, the deadlines haven't gotten easier." 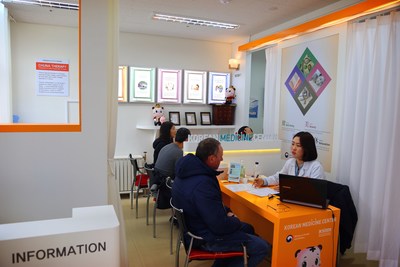 Many journalists and reporters from countries around the world arrived prior to the opening ceremony of the PyeongChang 2018 Winter Games. As they began covering the preparations being made for the Games, many started showing an interest in the Korean Medicine Center, located in Gangneung Media Village. Olympic Broadcasting Services (OBS), which serves as the host broadcasting organization for the entire Olympic Games, along with China's CCTV, Russia's Izvestia, and other foreign broadcasters, have introduced the Korean Medicine Center in their coverage of the preparations for the Winter Games and shared information about the center with their fellow reporters and journalists, who needed help recovering from their long trips to Korea and maintaining the energy levels necessary to properly cover the Olympic Games.

Ricardo Chi from the American broadcasting network NBC went to the Korean Medicine Center for the first time on January 30. Since then, he has been visiting the center whenever he has free time to receive chuna manual therapy. Chi is being treated for back pain, and he is extremely satisfied with the results. Now that he has taken his colleagues to receive the therapy as well, the benefits of Korea's chuna manual therapy have become the talk of the town at the NBC work center.

South Korea's Ministry of Health and Welfare and the Korea Health Industry Development Institute opened the Korean Medicine Center on January 15, prior to the opening ceremony on February 9, in Gangneung Media Village to help keep the delegations of reporters and journalists visiting from around the world in good health while they report on the PyeongChang 2018 Winter Games. The center provides warm Korean medicinal herb tea to reporters and journalists struggling with exhaustion after spending long days reporting on Winter Games-related matters and helps them stay healthy by providing Korean Medicine treatments administered by professional Korean Medicine doctors, thus spreading the word about the excellence of Korean Medicine, one of the important branches of medicine in Korea.