LOS ANGELES, Dec. 5, 2019 /PRNewswire/ -- We learned a lot about the next generation just by watching 2019 unfold on Tinder. In fact, 2019 was the year that Gen Z took Tinder by storm: people under 25 now officially represent the majority of the Tinder community. Which means if you want to see how the next generation is chit chatting or 'catching feelings', look no further than the realm of The Swipe. Whether they were trading Facepalm emojis or GoT theories, Gen Z's 2019 dating rhythms gave us a glimpse of the future, and it's looking pretty bright. 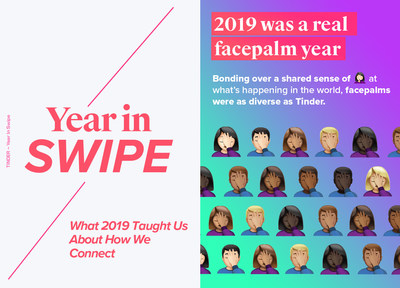 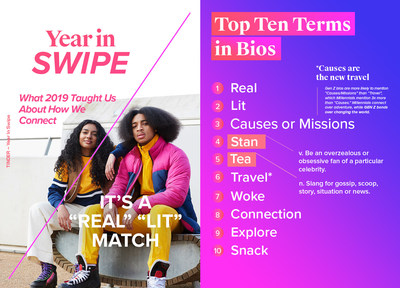 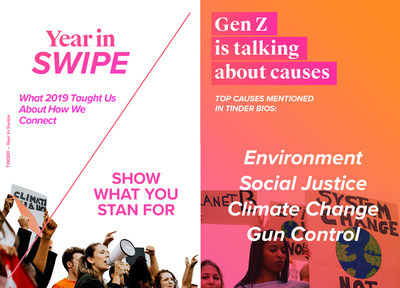 If Tinder was any indication, 2019 was a Facepalm of a year. While over 300 million emojis were used in Tinder bios in 2019, one rising star really caught our attention: the Facepalm. This emoji saw a whopping 41% increase in usage in Tinder bios this year. Apparently, if there's one thing younger generations bond over today, it's a shared sense of Facepalming at what's happening in the world. From Aunt Becky buying her kids' way into college, to spotting a Grande Latte in Westeros, to sksksksk'ing about our own daily fails, there was plenty that made us Facepalm in 2019. Fittingly, Facepalms were as diverse as Tinder, with every variation of the emoji making an appearance.

Based on their bios, it's clear Tinder members want authenticity above all. 'Real' topped the list of terms daters used in 2019, led by Gen Z (18-24). This year also sent people in search of someone who was 'Lit,' could spill the 'Tea,' 'Stanned' the same things they did, and was on a similar 'Mission.' Here are 2019's top terms in Tinder bios:

For Gen Zers looking to match, Causes are the new Travel.

We at Tinder can confirm the next generation of daters want a partner, not just to match with, but to march with too. Causes were more than a top trending term on Tinder in 2019: they were a symbol of a new generation. Gen Zers were more likely to mention Causes or Missions than Travel in their bios, a huge contrast to millennials, who were 3x more likely to tout Travel than Causes. Millennials connect over adventure, while Gen Z bonds over changing the world. Phrases like climate change, social justice, environment and gun control topped the list of what Gen Z cares about.

We want someone who Stans the same things we do.

From Lil Nas X's old west to the Seven Kingdoms, these 2019 cultural moments became the ultimate fodder on Tinder. The next generation of daters is looking to connect over everything from female superheroes (Captain Marvel, Lizzo, Elizabeth Warren) and mother nature (Green New Deal, anyone?) to the Jo Bros, and they want potential baes to know about it. These topics popped in Tinder bios in 2019:

Honorable mention - Area 51. Attendees may not have seen them aliens, but they did find someone to hunt with. Area 51 not only almost made it into the top trending topics, it was also the most popular Tinder badge in 2019.

LGBTQ+ pride events kicked off a month of matching mania, with June boasting the most matching days of any month in 2019. Guess they don't call it Summer Lovin' for nothing. But LGBTQ+ pride didn't only run high in June! In fact, 30% more people used Tinder's More Genders feature this year compared to last, as a way to best reflect their authentic selves. Usage of the rainbow emoji in Tinder bios also increased 15% globally from 2018 to 2019. Hey, you know what they say – if you got it, flaunt it!

As we approach an election year, it's no surprise that politics saw some serious action on Tinder. Democratic presidential candidates, along with our current president, dominated the list of political figures who helped give Tinder members something to talk about. But a few well-known triplet acronyms, AOC and RBG, also gave daters a chance to connect.

The Olympics may still be months away, but Tokyo already scored gold as the city with the biggest increase in activity per member in 2019. The Nordics also medaled, with Oslo and Copenhagen making the list, as did Eastern Europe courtesy of Warsaw and Budapest. Looks like it's time to get your hearts and passports ready for 2020.

Spikes in the Sun Belt

Hotlanta earned its name in 2019, with sparks flying at an all time high in the Sun Belt capital. Atlanta was the top mover-and-shaker, with the biggest increase in activity per member in 2019, followed by Orlando, San Diego and Dallas. This jump in sunnier salutations might be due to the trend of Americans moving from the coasts to the Sun Belt, and it looks like the first thing they do when they land is use the Swipe Right feature. These cities saw the biggest lift in activity in 2019:

And beyond these fastest-growing spots for Swipe Surge periods, Albuquerque, Salt Lake, Nashville and Denver are also emerging as places to check out. New Years' trip to Nashville anyone?

View the release with emojis here.

Information included in this campaign represents overall Tinder trends, not the personal information of any specific, identified individual or member. App activity and bio data are representative of global Tinder activity between January and November 2019.