NEW YORK, Nov. 25, 2019 /PRNewswire/ -- Brian Evans, known for such thematic songs as "At Fenway," co-starring William Shatner, and "Creature at The Bates Motel," a Halloween music video co-starring comedian Carrot Top, has written the first jazz song ever to be recorded about the game of soccer (aka, football / fútbol in many countries worldwide). 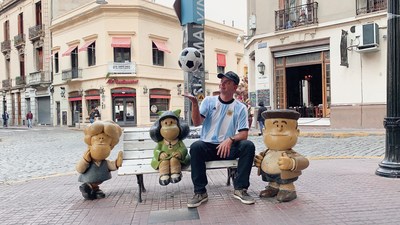 Evans' music video "At Fenway" was added to The National Baseball Hall of Fame library in 2015, and he is the only singer ever to film a music video at The Bates Motel, the filming location for the Alfred Hitchcock thriller, "Psycho," when he recorded his song "Creature at The Bates Motel." Grammy Award winner Narada Michael Walden produced "At Fenway," the original song by Evans.

A big band crooner in the style of Frank Sinatra, Evans has headlined in Las Vegas, performing as the opening act for Joan Rivers, Jay Leno, Erasure, and dozens of others. His music is also heard on popular TV shows such as the Netflix series, "BoJack Horseman." He's also authored several books including "Horrorscope."

The song "A Beautiful Game," written by Evans, was produced by Grammy Award winner Gary Anderson. The music video features cameos by Lou Diamond Phillips, RJ Mitte from "Breaking Bad," comedian Carrot Top, Julio Pena of South America's "Disney Bia," and Actor/Rapper ICE-T. The music video, now in post-production, was filmed in Miami, Florida, Cancun, Yucatan, Buenos Aires, Argentina, New York, Los Angeles, Maui, and Brazil. Evans is now only the second singer to film a music video at Chichen Itza, following singer Jennifer Lopez. Unlike its baseball counterpart "At Fenway," which has surpassed 11 million views on YouTube, the new soccer song does not mention a specific team, enabling it to be broadcast throughout the world, and across soccer teams, without conflict.

Participating in the production for the music video alongside its cast, is Sami Halabi, Founder / CEO of "learn languages through music" startup, Univoice. "Brian's tasteful way of bringing an already-tight community closer together through the universal language of music is ingenious," says Halabi. "It is 100% aligned to our mission & values."

"I'm honored to film this music video about soccer that fans can follow the bouncing ball to in stadiums throughout the world," says Evans. "The historic element is humbling. We are really happy with the amount of potential sponsors that have been approaching us."

Evans is in discussions with several casinos in Las Vegas about another residency. He just signed a deal with WestWind Comics, distributed by Diamond Comics, for "Horrorscope" to be adapted from his novel to a graphic novel. "And it will be a lot more than a graphic novel," says Evans.

The music video was produced by Thematic Productions, along with the cast.