THOUSAND OAKS, Calif., Sept. 23, 2020 /PRNewswire/ -- In celebration of National Cooking Day, September 25, and in the spirit of inspiring Americans to discover something new in the kitchen, Thermomix, the leader in smart kitchen innovation, releases the results of its first annual Survey on the State of Cooking, conducted online by The Harris Poll® among over 2,000 US adults*. The secret is out -  our survey shows 70% of Americans have admitted to actually enjoying cooking at home during coronavirus  - and many plan to continue this trend into 2021 according to The Harris Poll COVID-19 tracker1. Many Americans may be craving more time in the kitchen, something that Thermomix stands for and wishes to promote on National Cooking Day. 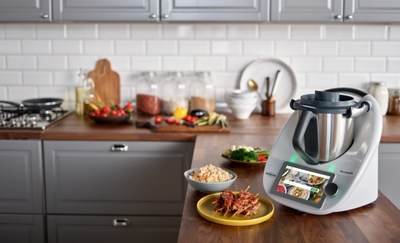 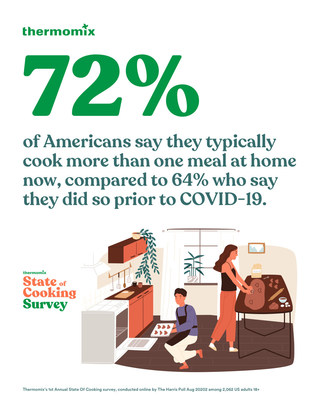 The full survey, which shares new insights into cooking at home trends in 2020 among Americans, reveals that not only are individuals having fun experimenting in the kitchen, but they are actively looking for smarter, more automated solutions to make the process of cooking more intuitive.

Thermomix's Survey on the State of Cooking Highlights Include:

According to our survey, the top three reasons Americans want to add a smart kitchen appliance to their household in the next five years are for speeding up the cooking process (40%), to make clean-up easier (37%) and to learn how to cook (37%). Thermomix has worked diligently for nearly 50 years to deliver a solution that can do just that.

Released in 2019, the Thermomix TM6™ (https://www.thermomix.com/tm6/) is a digitally-powered all-in-one kitchen appliance that can perform 22 unique culinary functions and connects to WiFi for a world of guided recipe inspiration through Cookidoo®, the proprietary integrated recipe and meal planning ecosystem that boasts over 50,000+ guided cooking recipes. Where other appliances fall short in delivering complete, gourmet meals, the TM6 is able to whisk, caramelize, brown, chop, steam, sauté, blend, boil, knead, emulsify -- and is regularly updated with new functions via over-the-air updates. This month, Thermomix introduced five new features to the TM6 through its latest software update, including two new modes (egg boil mode, warm-up mode),  guided step videos that play directly on the screen of the TM6, and more.

Earlier this summer, Thermomix became the first smart appliance to integrate a shoppable recipes feature into the Cookidoo® platform. The intelligent technology integration pairs recipes with pre-matched ingredients to allow for an effortless checkout, eliminating the tedious process of searching for the correct ingredients through a third party grocery app. With the launch of in-app grocery purchases, Thermomix became the first smart kitchen appliance to truly do it all.

For more information on Thermomix and their quest to build a smarter kitchen, visit: https://www.thermomix.com/

For a full list of survey findings, please visit https://bit.ly/32QXoMv

*Survey Methodology: This survey was conducted online within the United States by The Harris Poll on behalf of Thermomix between August 27-31, 2020 among 2,062 adults ages 18+. Results were weighted for age within gender, region, race/ethnicity, household income, education, and size of household where necessary to align them with their actual proportions in the population. Propensity score weighting was also used to adjust for respondents' propensity to be online. This online survey is not based on a probability sample and therefore no estimate of theoretical sampling error can be calculated. For complete survey methodology, including subgroup sample sizes, please contact Thermomix Brand Experience Director, Cristina Dennstedt, [email protected].

ABOUT THERMOMIX® Since its inception in 1971, Thermomix® has been revolutionizing kitchens across the world. Evolving from seven functions to a total of 22 unique capabilities with the new Thermomix® TM6™, Thermomix continues to set the standard for smart kitchens globally. Used in more than 10 million kitchens worldwide, Thermomix has been transforming kitchens for nearly five decades. From home cooks to executive chefs, Thermomix makes achieving culinary feats effortless. In a modern society where time is precious, Thermomix is poised to digitally revolutionize the art of cooking by streamlining the process in its entirety.