LOS ANGELES, May 6, 2020 /PRNewswire/ -- "This Day Forward" (https://www.thisdayforwardmovie.com/), a faith-based film based on the true story of a young, Midwestern family whose faith helps them overcome the fears and uncertainties of terminal illness, will be released on Vimeo on May 5th, 2020.  The film stars Randy Coleman and Hayden Blane, was written by Nick Schober, and was produced & directed by Brian Ide on location in Waverly, Iowa. 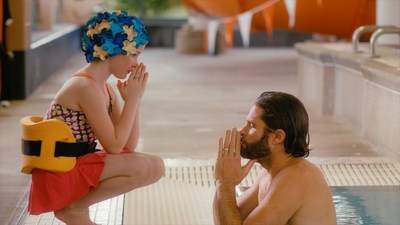 This Day Forward tells the real-life story of when Mike (Randy Coleman) and Jennifer Jensen (Hayden Blane) come face-to-face with Mike's diagnosis of stage 3 brain cancer and they and their young family are forced to navigate not only his changed reality, but the shoals and currents of fear, uncertainty and doubt. As Mike, a Lutheran music minister, finds his belief in the help from the Almighty challenged while suffering the debilitations of the disease, Jennifer struggles with her own faith journey as she holds her family together. It's about the ways in which courage and hope overcome uncertainty and fear, ultimately leading to a deeper understanding of God's plan.

Said Ide, "Our motivation in making this film was inspired by a belief that people might benefit from a different story of faith; a story, like the Jensen family's, that is messy and where problems aren't easily prayed away."

The film begins with the Jensen's new relationship developing through their shared faith and Mike's music.  As sung by Coleman, the film features original music by the real-life Mike Jensen.  Their family grows as, one by one, their children, Aria (Kallen Blair), Allie, and Mimi Jensen (played by themselves) are born. After suffering a middle-of-the-night seizure, Mike undergoes a series of tests that reveal he has cancer. The family starts on their path armed with faith which enables them to face their fears and uncertainties and to fight on, even as surgery, chemo and radiation therapies fail to slow the tumor's growth.

Added Ide, "Against Hollywood conventional wisdom to release the film in the fall, we decided to release it now because the film pits an incredibly hopeful story against the unimaginable and we realized that the whole world, right now, seems to be living that same story.  This film was always meant to be ministerial, so if it helps people to realize they're not alone, what better time than now?"

Said The Most Rev. Michael B. Curry, Presiding Bishop of the Episcopal Church, "This film does not offer easy answers or shallow platitudes.  Instead, it hits reality head on, and by doing so points us to find in God the strength and love we need … and to share that strength, to share the Way of Love with others around us."

About "This Day Forward""This Day Forward" (https://www.thisdayforwardmovie.com/) is a faith-based film based on the true story of the Jensen Family who face the fears and uncertainty of terminal illness.  The film stars Randy Coleman and Hayden Blane, was written by Nick Schober, and was produced & directed by Brian Ide.  It was shot on location in Waverly, Iowa.  "This Day Forward" is 100% philanthropic, with all profits going towards furthering this ministry and to the Jensen family to help offset their medical expenses. Film trailer, photos, international response and rental available on the film's website.  (running time: 99 minutes)