MORRISTOWN, N.J., April 14, 2020 /PRNewswire/ -- The Abbey, one of Morris Township's last mansions from the Gilded Age, is poised for a rebirth. Restoration Hardware, the upscale home furnishing chain now known as RH, is making a pitch to the Township Committee to transform the Madison Avenue manor into a glamorous showroom, restaurant, and wine bar. A planning board meeting was scheduled for Monday, April 6, 2020, at 7:30 pm, and a special session of the Committee is set for April 29. Both meetings hinge on whether remote presentations can be arranged to include public participation, Mayor Cathy Wilson said on Thursday. Public gatherings are prohibited because of the coronavirus pandemic. 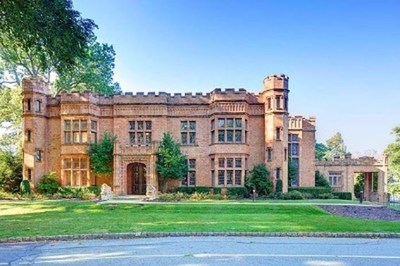 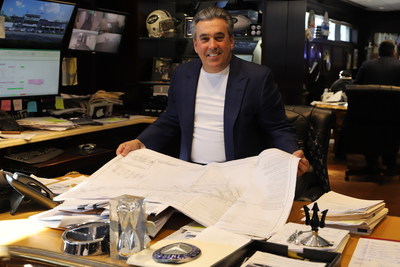 "The Abbey has been vacant for years. It's a beautiful, historic structure that many people (including me) would love to preserve and re-purpose. Doing so is easier said than done. Several attempts over the years have failed," Wilson said in a message to the community.

Restoration Hardware became interested in 2017 after seeing the Abbey, also known as Alnwick Hall, featured by Mansion in May, a month-long fundraiser for Morristown Medical Center, according to owner Tom Maoli. A redevelopment plan was submitted to the Township Committee last month. The Township declared the Abbey an area in need of redevelopment in September 2018. Maoli, owner of Celebrity Motors, bought the 42-room Renaissance Revival mansion for $6.25 million in 2008.

"The design of the building was absolutely stunning, a castle. I wanted to be king of my castle," said the Mendham resident, who intended to make the Abbey his office.

But heating, air conditioning and maintaining the massive structure proved daunting. Records show taxes topped $62,000 last year. Maoli considered a housing development for the six-acre site, and he applied for a demolition permit. He also conducted an online survey of residents. More than 500 responded that they favored saving the Abbey, he said.

"The Restoration Hardware plan is spectacular," Maoli said. "It saves the grandeur of the site, and will be the pinnacle of Morris Township. This will put Morris Township on the map… I think it's a win-win for this town, and for the people and the history of the town."

The building fronts Madison Avenue, and except for removing a narrow portion in the back, its exterior will remain intact. This rear area of the Abbey would be removed in the redevelopment plan proposed by Restoration Hardware. Two main additions are planned: A two-story showroom to the right side of the original building that runs parallel to Madison Avenue, as well as a restaurant and wine bar on the far rear of the property, midway between the two buildings. Diners will be surrounded by gardens and a patio used to display RH outdoor furniture. Restoration Hardware CEO Gary Friedman, 62, likes to call his stores "galleries." According to Forbes, the mall-sized stores ranging between 6,000 and 10,000 square feet gradually are being phased out in favor of large, free-standing buildings between 46,000- and 90,000 square feet. Grandiose showrooms, many with restaurants, are in Chicago, West Palm Beach, Nashville, Toronto, New York, and Yountville.

How does the 21,000-square-foot Abbey fit into this picture? It's part of a strategy to supplement the over-the-top urban approach for which RH has become well known. Friedman now is opening smaller galleries in affluent areas and second home markets such as the Hamptons, Palm Beach, and soon in Aspen, with products tailored to local tastes. Whether large or small, selling furniture in an RH gallery is deliberately incidental to experiencing a lifestyle — and then being seduced by it. Luxurious monochrome interiors loaded with texture are essential to the look. Linen, leather, fiber, chunky wood and a general lack of pattern, are combined with slightly oversized furniture to bring it all home. Sales are always the bottom line, so the expectation is that after having a great meal and a glass of wine at an RH restaurant, you will be enticed to buying a chair or two — or more — before you leave.

About Tom Maoli: Mr. Maoli is the President and CEO of Celebrity Motor Cars, LLC a luxury dealership group based in New Jersey and New York. These dealerships include: Lexus of Route 10, Maserati of Morris County, Alfa Romeo of Morris County, BMW of Springfield, as well as Mercedes-Benz of Goldens Bridge. In addition to his growing automotive empire; Tom is the president and CEO of Real Estate Opportunity Investments, LLC, a residential and commercial real estate development and investment company, along with being founder and CEO of Joe Zone coffee company. Listeners may reach him via email him through his website at http://tommaoli.net