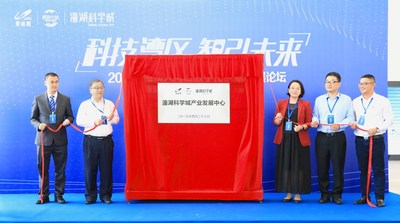 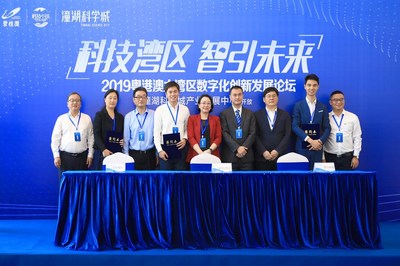 At the "Tech-Driven Greater Bay Area, Intelligence Leads the Future"-themed event, the Center, co-established by Country Garden and Cisco, was formally opened to the public. The signing ceremony for Tonghu Science City Big Data Industrial Park was also held. On the same day, industry professionals and business representatives held discussions on several topics including the digital industrial transformation of the GBA as well as the current development track of companies in the region and how they can achieve the transformation, creating a feast of thoughts on the innovation and development taking place during the digitalization process.

Empowering the next phase in city-industry integration

China's 13th Five-Year Plan includes a proposal to implement a national big data program by promoting the overall development of big data as a fundamental strategic resource, accelerating the sharing, opening up, development and application of data resources, while facilitating industrial transformation and innovation in social governance.

In line with the building of a digital China and the promoting of the digital and integrated development of industries as key elements of the country's economic roadmap, Tonghu Science City was created. The opening of the Tonghu Science City Industry Development Center was another important milestone in Country Garden's city-industry integration strategy. The center will serve as a technological innovation platform for industrial development as well as a showcase for the construction of distinctive new towns in concert with city-industry integration in the GBA.

Tonghu Science City, co-developed by Country Garden and Cisco, is located in the Huizhou Tonghu Ecological Smart Zone, the "Silicon Valley in Guangdong", at the junction of Shenzhen, Dongguan and Huizhou, and is an important part of Tonghu Sci-Tech Town. Construction of the six-square kilometer project started on December 5, 2017. Being committed to digital, cloud computing, intelligent and other cutting-edge technologies, Tonghu Science City will provide powerful data processing and cloud services for the GBA, and rely on industries to help tens of thousands of small and medium-sized enterprises improve the quality and scope of their big data applications. Furthermore, Tonghu Science City will help the Huizhou Zhongkai (HZZK) Hi-tech Industrial Development Zone accelerate the gathering of innovative and high-end elements, facilitating Huizhou's build out of a modern industrial system, while promoting sustainable and high-quality economic development.

Tonghu Ecological Smart Zone Party Committee deputy secretary and administration committee director Chen Dehua said that the opening of Tonghu Science City, located in the eastern part of Tonghu Sci-Tech Town, was an important achievement of the HZZK Hi-tech Industrial Development Zone in that it serves as the implementation of an innovation-driven development strategy, promotes regional economic development and creates a modern industrial system, while encouraging companies, such as Country Garden and Cisco, to bring in more innovative resources, further helping Tonghu Ecological Smart Zone earn its claim as being the "Silicon Valley in Guangdong" and transform Huizhou into one of China's most modern and up-to-date cities.

Country Garden Group vice president and Industrial City Integration Center general manager Liu Ning said that Tonghu Science City, an important part of Tonghu Sci-Tech Town, will focus on the development of digital, cloud computing, smart and other high-tech industries. The group plans to drive the development of both Tonghu Science City and Tonghu Sci-Tech Town with a focus on bringing together industrial resources, enhance the quality of local talent and provide them with a meaningful communications platform while improving the management and operation of local industries.

Cisco Greater China vice president and Smart City general manager Yang Bo said, by being based in Huizhou and serving the GBA, Cisco and its many partners have jointly created an ecological chain for the information industry in Tonghu Science City and enhanced its competitiveness. With the scientific city as the base, Cisco will continue to assist Chinese enterprises in their digital transformation as a means of promoting integrated growth and development across the sector.

The one billion yuan (approx. US$150 million) big data industrial park in Tonghu Science City is on track to commence phase one operation by 2020. In addition, the construction of the big data center, jointly built by Cisco, Country Garden and Runyang Group, will begin at the end of May this year. The project will directly serve firms in Tonghu Sci-Tech Town, including Cisco, as well as companies in the GBA, with a focus on high-tech firms in Shenzhen's big data sector.

At present, driven by the continuing and rapid development of Internet, the Internet of things, cloud computing, artificial intelligence and other information technologies, human society is taking on new forms such as perception of everything and connection of everything, among others. As required by the outline of the development plan for the GBA issued in February this year, we must give full play to the driving role of leading enterprises, aggressively develop the digital and shared economies, promote economic transformation and social development.

Digitalization has become a new direction for industrial economic transformation. At the "2019 Guangdong-Hong Kong-Macau Greater Bay Area Digital Innovation Development Forum", big data expert Tu Zipei said the collection and analysis of data is already a well-established industry, with its upstream and downstream actively collaborating with each other. Commenting on what's the next stop for digital development, Tu said leveraging the cloud for the manufacturing sector is the hot topic to be discussed at the moment. The cloud is necessary for the personalization of the production process across the manufacturing sector, while information-, smart-, cloud-based manufacturing management translates into development of an industry befitting the 21st century.

Pactera Group vice president Li Jie said during his keynote speech entitled Thoughts and Practice on Companies' Digital Transformation, "Digitalization is having a profound impact on the business environment and as a result, all companies may turn into digital natives eventually. We are empowering the industrial development and disruption across the IT ecosystem with digital approaches. Pactera is also facilitating industrial transformation and innovation by leveraging its comprehensive IT capabilities."

Institute of Guangdong, Hong Kong and Macao Development Studies, Sun Yat-sen University professor and Institute of Free Trade Zone executive vice president Fu Zhengping said that the GBA has nearly reached the point of being qualified to build a modern industrial system and promote industrial integration. He suggested that this goal can be realized by furthering the combination of technological progress and industrial development as the build out of the Guangzhou-Shenzhen-Hong Kong-Macao Science and Technology Innovation Corridor moves into the next phase, exploring the idea of developing industry clusters within the pilot free trade zones, as well as building an industrial cooperation platform with a focus on jointly investing in emerging strategic industries.

What opportunities are available and what challenges do companies face as the GBA continues to develop? How will companies contribute to the digital transformation of industry? The roundtable session that took place at the event brought together several top executives from different industries who engaged in a multi-dimensional discussion on the innovation and development taking place during the digitalization process.

Runyang general manager of data Chen Xiaodan said that the company has felt that the capabilities in communications, coupled with data technology, are opening up the next era of the internet as data technology evolves from information technology. Cisco Greater China vice president Yang Bo said, "Cisco has taken on a digital transformation journey. The company has differentiated itself from a number of cloud solutions providers with innovations that support efficient people-to-device and device-to-device connections. Accenture Greater China vice president Li Guanghai added, "With the device-to-device, platform-to-platform and cloud-to-cloud connections, data safety and privacy protection are emerging as top concerns. Flexible and large-scale manufacturing will be a normal response to the need for personalized services."

When commenting on the development of Tonghu Sci-Tech Town, Xiang Junbo, general manager of the residence-industry integration business unit at Country Garden said, "Our Tonghu Sci-Tech Town aims to turn itself from a product and service provider to an ecosystem builder. As part of the transition efforts, the town will first build a platform and then an ecosystem, enhancing the merging of lifestyles in the GBA and the surrounding rural areas. The good news is that on April 27, Beijing Camelot Technology and Pactera formally opened their facilities in Tonghu Sci-Tech Town, which will also be the home of our group's Digital Management Center."