KYOTO, Japan, May 29, 2019 /PRNewswire/ -- Hotel Management Japan Co., Ltd. (head office: Shibuya Ward, Tokyo; representative director: Shunzo Azuma; hereinafter referred to as "HMJ"), a hotel management company, has announced that it will open its Oriental Hotel Kyoto Gallery on Monday, September 2, 2019 in Kyoto's Kiyomizu-Gojo area. The hotel's concept is "The Essence of Kyoto." This is embodied via the combination of various traditional and stylish Kyoto motifs and by adding such essences to various areas of the hotel, allowing visitors to experience a comfortable space designed with people in mind and for the flow of hotel visitors. The hotel is located within walking distance of many historical areas of Kyoto, such as Gion, Kiyomizu Temple, and Yasaka Shrine, thus allowing visitors to enjoy Japanese art and culture along with the main attractions of the Kyoto cityscape. 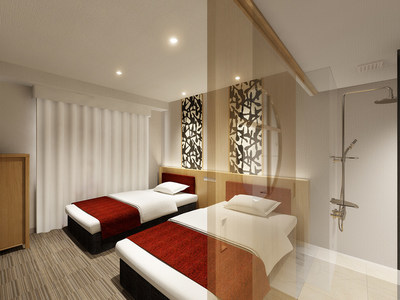 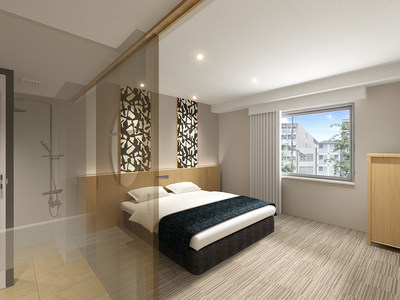 From the entrance, which welcomes guests to the lobby and to, eventually, the rooms, various Kyoto traditional motifs are incorporated along all the routes that guests walk. Visitors during their stay can experience a comfortable space designed with people in mind and for the flow of hotel visitors.

Vertical grid design was used during the Heian Period in shrines, temples, or in the residences of noble families, incorporated into doors or developed as fixtures. This design helps aid privacy, while also allowing breeze and light to penetrate inward.

During the middle of the Edo Period, kabuki actor Ichimatsu Sanogawa adored this pattern for clothing, causing the pattern to become favorable Japan-wide. It became preferred due to its auspiciousness, carrying the nuance of prosperity of offspring and the expansion of business, as the pattern continues uninterruptedly.

This bold form of composition, using gold and silver foil as the background, with repeating patterns, is said to be characterized by techniques such as tarashikomi drip painting, and is a school from the art of design that was active from the late Momoyama Period up to modern times.

Doma, a traditional form of flooring, allows one to do outside work while still inside. As a design, the hotel incorporates the Japanese doma atmosphere, via old fixtures, colorful lights, traditional doors, and an ambience that takes the "outside" and brings it "inside."

Using wood in construction is one of the traditional techniques of Japanese architecture. This beautiful technique, which does not use hardware, can be realized by processing surface unevenness for jointing, connections, and fitting on a single piece of material, done by a carpenter in a style unique to Japan, where there is a lot of moisture and where the temperature difference can be severe.

By putting Japanese washi paper on one side of a wooden frame as per a normal shoji screen but then by making the bottom portion of the wooden frame transparent glass, it was/is possible to see, for example, how much snow could possibly have piled up outside the room, thus the word/name yukimi shoji ("shoji that allows you to see the snow") was coined.

Suibokuga is believed to have been established in the Tang Dynasty and later introduced to Japan during the Kamakura Period. It is form of sumi-e painting that is expressed in ink (ink wash painting), not only via black ink lines, but also in ways that represent shading, lightness, and darkness, via blurring.

Breakfast: The breakfast buffet carries the theme of "A meal with soup." The chef-designed soup menu that pays homage to each season incorporates three different soup types featuring casual nutrition that will warm your body. Come and enjoy your favorite soup with rice and toppings.

Cafe: The cafe/restaurant can be used as a free space for guests only during the daytime, where visitors can enjoy their favorite coffee, tea, or green tea, etc.

Hotel Management Japan Co., Ltd. (HMJ) is a hotel management company that operates 18 hotels in Japan with a total of 5,433 rooms. HMJ operates widely in the sphere of hotel management, such as for Tokyo Disney Resort® and for partner hotels, as well as for domestic and foreign brands such as "Oriental," "Hilton," "Marriott," and "Holiday Inn" nationwide in Japan.