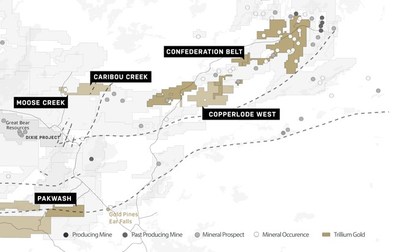 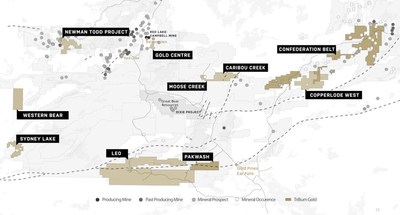 VANCOUVER, BC, Nov. 24, 2020 /PRNewswire/ - Trillium Gold Mines Inc. (TSXV: TGM) (OTCQX: TGLDF) (FRA: 0702) ("Trillium Gold" or the "Company") is pleased to announce that it has signed an agreement to acquire a 100% interest in the Confederation Lake Properties ("Confederation Belt") from Pistol Bay Mining Inc. consisting of nearly 15,000 hectares. The purchase price for the Confederation Belt properties is $500,000 in cash and $1,250,000 of Trillium Gold Shares, based on the 5 day VWAP of the Trillium Gold Shares 2 business days prior to the Closing Date. The completion of the transaction is subject to the approval of the TSX Venture Exchange.

Trillium Gold plans to target breaks within the mag high areas on the newly acquired claims, along strike from VMS style mineralization and in close proximity to deformed meta-sedimentary rocks with characteristics similar to those of the geological marker sequence identified at the LP Fault.

Russell Starr, CEO of Trillium Gold comments "The possibility for these newly acquired claims to have the potential of hosting economic mineralization is exciting for the company. Trillium Gold continues to execute on its strategy of becoming a major player in the Red Lake district. These properties, in the Confederation greenstone belt, have similar geology to Great Bear's Dixie project. The prospect of potentially finding another Dixie in this land package is tremendously exciting for Trillium Gold's shareholders."

The Lucky, Fly and Moth ("LFM") properties cover an area of approximately 9,000 hectares and extend over an 18 kilometre stretch of the Confederation greenstone belt to within 1.5 km of the former producing South Bay zinc-copper-silver mine. The prospective felsic volcanics identified adjacent to the LP Fault Gold Zone are interpreted on the 2017 VTEM airborne survey to continue on the LFM properties. In this area, more than 7,000 rock samples from outcrop and drill core were analysed for major and traces elements, but less then 2,000 of these samples were analysed for gold.

The more than 3,300 hectare Joy property covers over 13km of prospective felsic volcanics of the Confederation greenstone belt.

A 48 metre diamond drill hole was drilled in the vicinity of the conductor (exact location unknown) in 1970 by Caravelle Mines Ltd. It intersected a variety of metavolcanic rocks exhibiting intense alteration of the type associated with Volcanogenic Massive Sulphide (VMS) deposits. It also intersected calc-silicate rocks suggesting that the property may lie at the same stratigraphic horizon as the Dixie zone, 11 kilometres to the west.

The Joy property covers five separate mineralized VMS zones that lie on two parallel horizons. The Diamond Willow Zone has a historical resource estimate of 270,000 tonnes grading 4% zinc plus copper (Pistol Bay Mining Inc. Press Release dated February 16, 2017). No mineral resource, historical or otherwise, has been calculated for any of the other four zones.

Augmenting the recently acquired Copperlode West claims, Trillium Gold has added another 850 hectares that covers prospective geology in and around the Copperlode East and Joy claims blocks.

The 2,175 hectare Pakwash Lake project is located in the Cabin Bay Area of the Red Lake Mining District southeast of Great Bear Resources' Dixie project. The property is accessible by old forestry access roads leading from provincial highway 105, as well as by boat via Pakwash Lake and the Chukuni and English Rivers. It is contiguous to Trillium Gold's 100% owned, 20,650 hectare Leo property – bringing the combined area to nearly 22,850 hectares and covering a strike length of 40km of rocks similar to those of the Eeyou Istchee/James Bay belt in North Eastern Quebec.

The property lies in an area of metasedimentary rocks of the English River sub-province, including a variety of granitoid intrusives, and is situated just to the south of a major structural zone called the Sydney Lake Fault. Metasedimentary terrains in the vicinity of major structures, once considered to have low mineral potential, have been the site of recent gold discoveries such as Newmont's Éléonore mine in northern Québec, the Curraghinalt gold deposit in Northern Ireland, and the Valentine Lake gold deposit in Newfoundland.

Data compilation and target generation is already underway on the newly acquired properties.

Figure 2 Location of the Trillium Gold Properties in the Red Lake District.

The technical information presented in this news release has been reviewed and approved by William Paterson QP, PGeo, VP of Exploration of Trillium Gold Mines., as defined by NI 43-101.

On behalf of the Board of Directors,

This news release contains forward-looking information, which involves known and unknown risks, uncertainties and other factors that may cause actual events to differ materially from current expectation. Readers are cautioned not to place undue reliance on these forward-looking statements, which speak only as of the date of this press release. The Company disclaims any intention or obligation, except to the extent required by law, to update or revise any forward-looking statements, whether as a result of new information, future events or otherwise.