VANCOUVER, Dec. 19, 2019 /PRNewswire/ - Turmalina Metals Corp. ("Turmalina" or the "Company") is pleased to announce that the company is following up on its recently reported initial drill program at the San Francisco project (the "Project") located in the mining-friendly state of San Juan, Argentina by assessing multiple additional breccias now identified on the property. 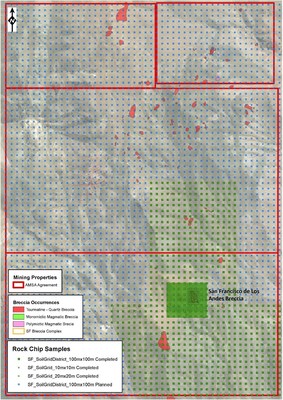 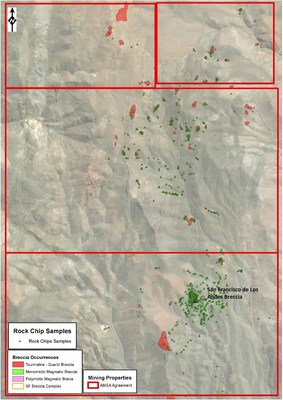 The Company is now conducting an aggressive field program at the Project with the aim of defining, sampling and prioritising the large number of other breccias on the Project. Highlights of recent field work include:

Turmalina is very pleased with the multiple intersections of high-grade gold at the SFdLA breccia pipe but it is important to note that this SFdLA breccia is only one breccia in a cluster of at least 67 other breccias on the Project.  This cluster of breccias allows Turmalina a path to target ounces at the Project through not only further drilling at SFdLA which is open at depth and laterally and appears to be flaring out at depth as previously reported, but also via these additional areas in near proximity to one another. We have wasted no time in commencing an aggressive field program to locate all mineralised breccias at the Project.

The current focus of field program is the mapping, sampling and prioritising of all breccias on the property, with the aim of defining drill targets for an early 2020 drill program that will test both regional targets and extensions to the high grade SFdLA breccia pipe. As our field program continues we expect to discover new mineralised breccias, and I am happy to report that we are on schedule to complete the first phase of mapping and sampling at the Project by February 2020."

The 3404 ha San Francisco project is located in San Juan, Argentina. The project area contains over 60 tourmaline breccia occurrences, several of which have supported small-scale mining. The Company is focused on mapping and sampling the breccias in the project area, and drill testing the highest priority targets.

About the Turmalina Project, Piura, Peru

Turmalina has entered into an agreement to explore the Turmalina copper-gold molybdenum project located in Piura, Peru (the 'Turmalina Project'). The Turmalina Project hosts a cluster of undrilled tourmaline breccias that were historically mined for copper, gold and molybdenum. The Company is currently engaged in the permitting process and will commence exploration on completion of permitting and the filing of a 43-101 report.

The current summer field program at San Francisco in San Juan, Argentina aims extend geological mapping and geochemical sampling (both rock chips and soils) over the entire Project area. High-priority breccia targets defined by this first-pass sampling will then be subject to detailed mapping and channel sampling prior to the selection of drill targets for an early 2020 drill program that will test both regional targets and extensions to the SFdLA breccia pipe. The company is also consolidating our regional holdings, with the project area being one section of an 80 km long gold-copper mineralised belt.

At the Turmalina Project in Peru, the Company is conducting social studies, validating mine grades and applying for all required permits before deciding whether to commit to exploration. The company plans to commission a third-party review of the property, with the aim of lodging a 43-101 compliant report in the new year.

The scientific and technical data contained in this news release pertaining to the San Francisco and Turmalina projects has been reviewed and approved by Dr. Rohan Wolfe, Chief Executive Officer, MAIG, who serves as the Qualified Person (QP) under the definition of National Instrument 43-101.

On Behalf of the Company,

About Turmalina Metals and the San Francisco Project:  Turmalina Metals is a TSXV-listed exploration company focused on developing our portfolio of high grade gold-copper-silver-molybdenum projects in South America. Our focus is on tourmaline breccias, a deposit style overlooked by many explorers. Turmalina Metals is led by a team responsible for multiple gold-copper molybdenum discoveries who are highly experienced in this deposit style. Our projects are characterised by open high-grade mineralisation on established mining licenses that present compelling drill targets. The principle project held by Turmalina is the San Francisco project in San Juan, Argentina. For further information on the San Francisco Project, refer to the technical report entitled "NI43-101 Technical Report San Francisco Copper Gold Project, San Juan Province, Argentina" dated November 17, 2019 under the Corporation's profile at www.sedar.com.