NEW YORK, Oct. 14, 2021 /PRNewswire/ -- October 2021 marks 40 years of U2's seminal album, October - and to celebrate, the rock legends have today announced the launch of the biggest-ever Artist Takeover on Pandora.

U2's Artist Takeover on Pandora is an exclusive listening experience where members of the iconic group take fans on a personal journey through the making of their first three albums - which include Boy (1980), October (1981), and War (1983) - sharing intimate personal stories, previously unknown details, and the music that inspired them along the way. 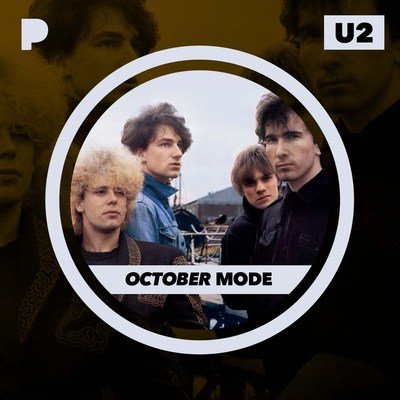 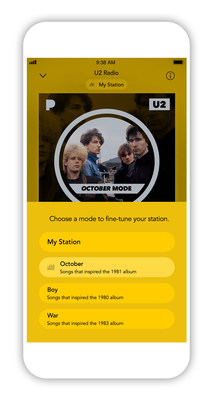 U2's Artist Takeover marks the first time an artist has created an ongoing series of self-curated Modes on Pandora. Users can now choose from three selectable "modes" on Pandora's U2 Radio station - each devoted to one of these three early albums - where the group shares personal insights and influences behind each record in their own words. Additional album Modes are expected to be rolled out on Pandora's U2 Radio station in the coming months.

On U2's Artist Takeover Modes on Pandora, band members share never-before-heard stories behind the making of each album, delve deep into the creation and recording of pivotal tracks, and share classic songs from the artists who influenced and inspired them -- from The Ramones to John Lennon to David Bowie – all in one unique listening experience.

"Pandora has given us an opportunity to tell U2's story in a completely new way, weaving the music of our heroes together with our own using songs, memories, and inspirations," said U2 guitarist The Edge. "Music is the most powerful storytelling medium, and Modes has created an incredible new way to share the sounds and experiences that made us who we are as artists."

"Few bands have been as consistently innovative, passionate, and riveting as U2, who are constantly evolving and yet still at the top of their game decades on," said Scott Greenstein, President and Chief Content Officer of Pandora parent SiriusXM. "We are thrilled to be collaborating with the band to create this truly personal and groundbreaking U2 music experience for Pandora listeners."

On each Mode, the band digs deep into its storied history to tell the tales and spin the songs behind the early years that launched the young band on its path to global superstardom.

Adam Clayton added - "Half of 'October' is kind of an admission from us that we are absolutely out of our depth, we don't know what we're doing, we don't know if there's a future for us as a band."

On the web, visit www.pandora.com/U2modes

U2's Artist Takeover on Pandora follows the launch of U2 X-Radio on SiriusXM, an exclusive SiriusXM channel devoted to the band's music, history, idols, influences, and current passions - all curated by U2.

Artist Takeovers are a "guest DJ"-style Pandora experience where top artists program a mix of their songs, along with favorites from other artists, and add their own personal commentary. Artist Takeovers are an extension of Pandora Modes, a unique feature that lets users customize their Pandora listening experience by choosing from selectable "modes" on their favorite stations to give more control over which songs they hear.

Pandora, a subsidiary of SiriusXM, is the largest ad-supported audio entertainment streaming service in the U.S. Pandora provides consumers a uniquely-personalized music and podcast listening experience with its proprietary Music Genome Project® and Podcast Genome Project® technology. Pandora is also the leading digital audio advertising platform in the U.S. Through its own Pandora service, its AdsWizz platform, and third-party services such as SoundCloud, the Company connects brands to the largest ad-supported streaming audio marketplace in the country. Pandora is available through its mobile app, the web, and integrations with more than 2,000 connected products.

SiriusXM's Stitcher Signs The Bellas Podcast, Hosted By Brie And...