CLEVELAND, June 22, 2018 /PRNewswire/ -- UAE Ambassador to the US Yousef Al Otaiba visited Cleveland yesterday for a series of community events, including a visit to the Glenville Community Soccer Field, which the UAE Embassy worked with the Cleveland Clinic Foundation and local partners to build last year. During the visit to Cleveland, the Ambassador and senior Cleveland Clinic officials met with local leaders for a roundtable discussion, participated in a forum on UAE-Ohio relations at the City Club of Cleveland, and visited Emirati patients at the Cleveland Clinic facilities. 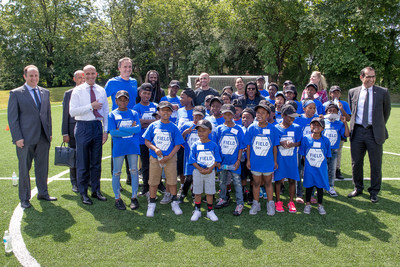 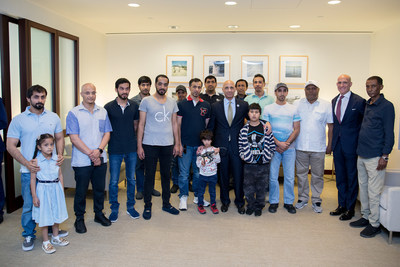 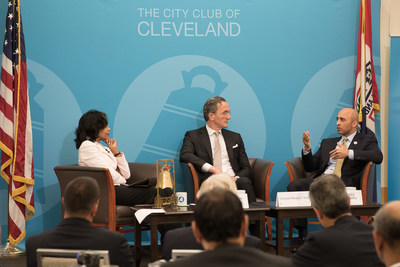 "Sports – and soccer in particular – continues to be something that brings us all together," said Ambassador Al Otaiba. "The UAE Embassy in DC is grateful to partner with an institution like Cleveland Clinic – especially on a project that enriches the lives of children and will endure in the community for years to come."

The UAE Embassy, in coordination with local partners, has supported the construction of nine additional soccer fields in underserved communities across the country.

Ambassador Al Otaiba and Dr. Mihaljevic also participated in a discussion moderated by former US Ambassador to Malta Gina Abercrombie-Winstanley at the City Club of Cleveland.

Throughout the forum, Ambassador Al Otaiba and Dr. Mihaljevic discussed the UAE's relationship with Ohio, including the strong relationship between the UAE and Cleveland Clinic.

"The UAE is fortunate to have such a powerful partnership with Cleveland Clinic," said Ambassador Al Otaiba. "This longstanding relationship began as a result of Emirati patients coming here from the UAE, and led to the opening of Cleveland Clinic Abu Dhabi, a one-of-a-kind facility in the Middle East. It is a perfect example of how UAE-US partnerships have a positive impact on communities worldwide."

"A critical part of our mission at Cleveland Clinic Abu Dhabi is to create a sustainable healthcare sector in the UAE for generations to come," said Dr. Mihaljevic, "We have formed a remarkable relationship and established a comprehensive health care system of the future with far reaching impact for patients worldwide."

The UAE Embassy and Cleveland Clinic have a strong partnership in both the US and the UAE. Over the past several decades, hundreds of Emirati patients have travelled to the Clinic in Cleveland to receive treatment. In 2015, the Cleveland Clinic partnered with Emirati company Mubadala to open the new Cleveland Clinic Abu Dhabi. The 360-bed facility treats approximately 400,000 patients a year, and patients travel from over 72 countries for care at the facilities.

The City Club of Cleveland is one of the oldest and most historic public affairs forums in the United States. The Club has hosted a vast list of speakers, including American Presidents, high profile political leaders, business executives, and civic officials.