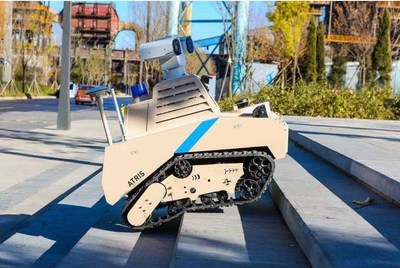 ATRIS enhances the efficiency of security patrols within Shougang Park and reduce the park's costs associated with security staff. UBTech plans to continue working with Shougang Park to promote the development of the AI-enabled digital community and improve the industry ecosystem characterized by AI applications, with the aim of becoming a model for Beijing's ongoing urban development and supporting the city's hosting of the 2022 Winter Olympics.

By using ATRIS, Shougang Park can establish a rapid, efficient and flexible smart security system, efficiently supporting security patrols within the park. ATRIS comes equipped with U-SLAM, an autonomous navigation feature that allows Shougang Park to build a comprehensive smart solution for security patrols by scheduling the locations, routes and time for such patrols based on the environment and local geography. ATRIS automatically adapts to a number of complex road conditions, including cobblestone paths, steps and sloping roads, in addition to being capable of conducting security patrols even under poor weather conditions.

ATRIS enables round-the-clock patrols and monitoring of sensitive areas within the park through accurate identification of persons within its range of vision even when cloudy, foggy or at night. ATRIS also comes with a "SOS" emergency call button that automatically calls for help when an emergency situation has been identified, allowing for real-time communication with the park's security center.

Founded in 2012, UBTech is a global leading AI and humanoid robotics company. In 2018, UBTech achieved a valuation of USD$5 billion following the single largest funding round ever for an artificial intelligence company, underscoring the company's technological leadership.