SANTA BARBARA, Calif., Sept. 9, 2020 /PRNewswire/ -- Celebrating freedom of expression, appreciation of the arts and its California roots, global lifestyle brand UGG® (a division of Deckers Brands [NYSE: DECK]) is honored to sponsor the opening weekend of the Hammer Museum's Made in L.A. 2020 presented in partnership with The Huntington. The fifth iteration of the acclaimed biennial, which will open Fall 2020 and run through the end of the year, features 30 Los Angeles-based emerging artists through works including new installations, videos, films, sculptures, performances and paintings, many commissioned specifically for the exhibition. Over the years, the museum has gained notoriety as one the most progressive art institutions in the world and Made in L.A. has been revered as a mainstay of California culture. 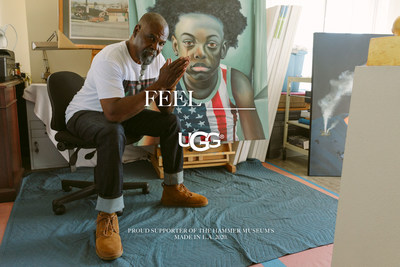 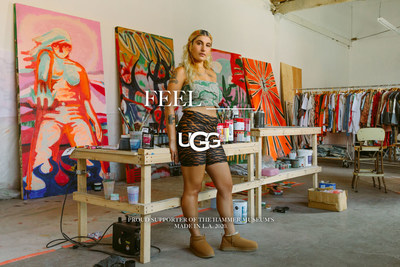 To honor the partnership, UGG® proudly showcases two Made in L.A. 2020 artists, Fulton Leroy Washington (aka MR. WASH) and Sonya Sombreuil in FEEL ____, powerful films that celebrate Californian artists who tell personal stories about their lives, their work and what fuels their creativity.

"We are really proud to partner with the Hammer, one of the foremost museums in the country known for their belief that art and ideas illuminate our lives and build a more just world", said Andrea O'Donnell, President, Fashion Lifestyle, Deckers Brands. "They are the perfect partner to launch our Autumn/Winter season and FEEL. UGG has always been an emotional brand and we believe that the personal stories of MR. WASH and Sonya Sombreuil are important reflections of what it means to be a human being today."

Set inside his home apartment/art studio in Compton, California, we learn the incredible story of artist Fulton Leroy Washington, a man who adopted drawing, painting and creative storytelling while in jail, where he spent twenty-one years after being convicted of a nonviolent drug offense in the late 1990s.  The inconceivable sentence at the time was life imprisonment, a policy set during the era of the "War on Drugs", however President Barack Obama commuted his sentence and granted him clemency in 2016.

MR. WASH'S first subjects were his fellow inmates: he created elaborate photorealistic portraits of his cohort, often setting them in idyllic landscapes, dressed in civilian clothing and free. Other portraits depicted the inmates' psychological fissures, including large tears drawn on their faces; some portraits were adorned with paintings within the paintings of fears or anxieties the subjects had shared with their portraitist.

In FEEL ____, we are bestowed with the wisdom and advice from MR. WASH, "Hydrate yourself, get some exercise, do something useful with your time." The viewer also gets a preview of one of his Made in L.A. 2020 paintings, a solemn tribute to the late Kobe Bryant.

The second FEEL ____ film provides a glimpse inside the studio of Made in L.A. 2020 artist and fashion designer Sonya Sombreuil. Self-identifying as an artist since the age of three or four, Sombreuil was born in Santa Cruz, California and her fashion label COME TEES is strongly rooted in Los Angeles' thriving streetwear scene. "My whole aesthetic is very located in an origin story, being surrounded by books and records," said Sombrueil. "I think that so much of my art is about locating that feeling."

Her work at the Hammer features paintings that function as walls for a kind of imagined space that functions as a gallery, venue, and gathering place and are a historical recreation of spaces that she's been through in her origin as an artist.

Both films were shot by Kauai Moliterno and Michael Barth, with stills being captured by Neil Favila with support from Production LA.  In the films, MR. WASH wears the UGG® Neumel chukka and Sonya Sombreuil wears the new Classic Ultra Mini.

UGG® is debuting two limited-edition T-shirts featuring the Made in L.A. 2020 works of MR. WASH and Sonya Sombreuil to commemorate the sponsorship. Available when the exhibition opens, the merchandise will be sold at the Hammer gift shop and UGG.com with a donation to Equal Justice Initiative.

Feel is an inherent part of the UGG® brand's DNA and what it delivers. For Autumn/Winter 2020 and beyond, the FEEL. will be the unifying theme with a variety of stories that support it. FEEL ____ with MR. WASH and Sonya Sombreuil will be followed by FEEL YOU. in mid-September, as an unapologetic celebration of individuality and style featuring a multitude of artists, creatives, designers, and activists from around the globe.

About UGG® Founded in 1978 by an Australian surfer on the coast of California, UGG® is a global lifestyle brand renowned for its iconic Classic boot. First worn by Hollywood royalty, fashion editors and then the world, UGG® designs and retails footwear, apparel, accessories and homewares with an uncompromising attitude toward quality and craftsmanship. Delivering more than $1 billion in annual sales, UGG® partners with the best retailers globally and owns over 130 concept and outlet stores worldwide in key markets including New York, San Francisco, Los Angeles, Paris, London, Tokyo, Shanghai and Beijing. For more information, please visit www.ugg.com. @ugg #feelUGG

ABOUT THE HAMMER MUSEUMThe Hammer Museum is part of the School of the Arts and Architecture at UCLA, and offers exhibitions and collections that span classic to contemporary art. It holds more than 50,000 works in its collection, including one of the finest collections of works on paper in the nation, the Grunwald Center for the Graphic Arts. Through a wide-ranging, international exhibition program and the biennial, Made in L.A., the Hammer highlights contemporary art since the 1960s, especially the work of emerging and under recognized artists. The exhibitions, permanent collections, and nearly 300 public programs annually—including film screenings, lectures, symposia, readings, music performances, and workshops for families—are all free to the public. More info: hammer.ucla.edu

ABOUT MADE IN L.A.The Hammer's biennial exhibition series Made in L.A. focuses exclusively on artists from the L.A. region with an emphasis on emerging and under-recognized artists. The Los Angeles biennial debuts new installations, videos, films, sculptures, performances, and paintings commissioned specifically for the exhibition and offers a snapshot of the current trends and practices coming out of Los Angeles, one of the most active and energetic art communities in the world. Made in L.A. 2020: a version is organized by independent curators Myriam Ben Salah and Lauren Mackler, with the Hammer's Ikechukwu Onyewuenyi, assistant curator of performance.