LOS ANGELES, Feb. 17, 2018 /PRNewswire/ -- Los York Entertainment announced today a new feature documentary film, Unbanned: The Legend of AJ1. Including unfiltered interviews with fashion, sports, music and pop culture icons, the film tells the true story and features first-hand personal experiences around the irreverent shoe that powered its way into our culture and changed the world. The film will be in limited theaters and available digitally on July 13, 2018. 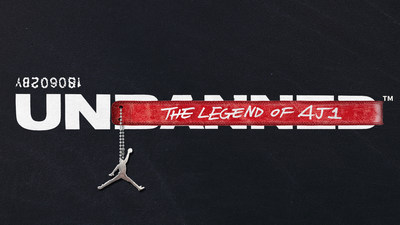 "The AJ1 is more than a shoe. It's a symbol of a much greater meaning across genders, race, geography and time. Now more than ever, what this shoe represents, its impact on society and its role in really creating, defining and redefining  a lot of our modern culture makes it a story that has to be told," said Writer-Director Dexton Deboree.

Unbanned: The Legend of AJ1 explores the dynamic journey of the Air Jordan 1 from its unlikely beginnings to its role in disrupting long-established rules of the NBA, changing the game of basketball, birthing sneaker culture and influencing a social and cultural revolution. Highlighting icons from across the cultural spectrum – including Spike Lee, Anthony Anderson, Michael B. Jordan, DJ Khaled, Lena Waithe, Kenya Barris, Jason Sudeikis, NBA stars Carmelo Anthony and Russell Westbrook, hip-hop legend Chuck D, as well as rising stars Gizzle, Christian Combs, and Kid Ink, and many more – the film takes a raw and riveting look at a movement that so heavily shaped the culture in which we live.

Unbanned: The Legend of AJ1 was written and directed by Dexton Deboree, co-founder of the award-winning creative agency, Los York. Unbanned marks the director's feature debut and official launch of Los York Entertainment, which focuses on long and short form entertainment with social impact and strong cultural influence.

Los York Entertainment is a new kind of company. They do sh!t differently. They make entertainment that matters, and ditch the BS. They've taken the best of film development & production and blended it with what works in marketing & advertising to establish one unique process. They create stories that move culture and affect change. They give back to the community. And put their money where their mouth is - through their stories and their actions. They take risks, forge their own path, and use power of storytelling to inspire the audience and truly change the world.