NEW YORK, Sept. 17, 2019 /PRNewswire/ -- Dating is complicated, and even more so in the age of photo filters and editing apps, according to new research of singles across the U.S. (view report here). Pressure Points, from dating app Plenty of Fish, provides a window into the realities of dating today, with more than 2,000 U.S. single adults weighing in revealing a desire for more authenticity, both in-app and in-person. 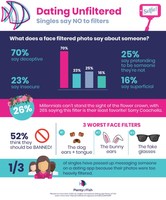 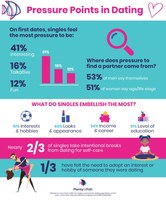 The research reveals that singles are embellishing more aspects of their lives - and it stems primarily from self-induced pressure. Regardless of age or gender, singles feel immense pressure to be interesting (41%) on first dates, distantly followed by what would be traditionally considered important for a first date, being talkative (16%) and fun (12%).

The findings also uncovered a struggle to keep up with the pace of modern courtship, with 62% of singles admitting to taking intentional breaks from dating to focus on themselves and self-care.  Fifty percent of respondents have not been on a single date in the last year.

"Singles today are craving greater transparency in dating, with the large majority of singles wanting honest, straight-forward information both from potential partners, as well as in their own self-presentation," observed board certified clinical psychologist and author Dr. Cortney S. Warren.

The study also found that more than half of singles feel pressured to embellish their interests and hobbies, even over looks and appearance (45%), income and career (34%), and level of education (31 %). One third of singles (33%) have even felt the need to adopt an interest or hobby of someone they were dating.

The leading cause of pressure is self-induced, and based on age and/or life stage. When broken down by gender, 53% of men said it came solely from themselves, versus 49% of women, who identified life stage/age as the leading factor for the pressure (51%). Surprisingly, very little pressure was felt from immediate and extended family (22%, 17%), friends (22%) and social media (19%). Additionally, men reported that their favorite part of dating is sex more than women (20% compared to 3%), and women feel more pressure to impress through style/appearance than men (26% vs. 17%).

"These findings are consistent with mainstream U.S. gender roles that place paramount value on physical appearance as a determinant of female value," continued Dr. Warren.

Filterless Faces, PleaseWhile face filters are prevalent today, thanks to Snapchat and other social apps, singles don't want to see them in dating profiles. Seventy percent of singles consider face filters to be deceptive, and more than half (52%) believe they should be banned from dating apps altogether. One in four singles say using a face filter implies that someone is pretending to be someone they're not, 23% said they seem insecure, and 16% said they appear superficial. One in three singles (30%) have passed up messaging someone on a dating app because their photos were too heavily filtered.

Findings also show that it's probably not photos that make it or break it for daters. Sixty-five percent of singles would rather see more information on someone's dating profile than more photos, and 70% of singles want their own dating profile to be more reflective of their true selves.

Craving the Real Deal  Though the dating world can be overwhelming and fraught with self-doubt (60% of millennial women report feeling immense pressure to appear perfect), singles are finding ways to let the "real" them shine through in their quest for love. Sit down dinners were identified as the best date for singles to be themselves (29%) followed by activity-based dates (27%). Singles feel least able to be themselves when meeting a date at a bar (9%). The best way for a date to make them feel more comfortable is to just relax and be themselves.

People who have never used dating apps take the longest to feel comfortable being themselves on dates. Almost one in five (19%) don't feel comfortable until they are in a committed relationship.

Singles also revealed the best ways to overcome feelings of inadequacy when it comes to dating. Focusing on hobbies and things they're good at came in as the top answer, while 20% said they focus on family and friends, 18% spend time alone, and 14% lean into exercise.

"One of the most important findings in the study is that singles are not interested in seeing an idealized depiction of potential partners through edited photos and unrealistic positive self-descriptors," said Dr. Warren. "The truth is, singles want more honest, authentic depictions of others and themselves on dating apps. A more realistic portrayal of each individual will not only be refreshing, but also lead to more meaningful connections."

In advance of the Pressure Points research, Plenty of Fish conducted hundreds of interview sessions with Plenty of Fish users that reinforced the company's low pressure position in the dating app world. To build on this and further drive authenticity in dating, the company has launched the industry's first face filter ban, along with a massive effort to remove face filters from its dating platform with the full audit of 70 million images, anticipated to be completed later this year.

About Pressure Points 2019 Pressure Points is an in-depth study that examines the causes and effects of the spectrum of pressures that singles experience in their dating lives. To view the complete findings, please download here or email [email protected] for a copy of the full report.

About Plenty of Fish Plenty of Fish, a Match Group (NSDQ: MTCH) company, is one of the largest global online dating companies, and is available in 11 languages and more than 20 countries. Unlike many dating offerings today, Plenty of Fish offers a less prescriptive, low-pressure user experience that allows singles to discover what they're looking for.