TORRANCE, Calif., Nov. 19, 2018 /PRNewswire/ -- In partnership with Universal Pictures and Illumination's Dr. Seuss' The Grinch, Honda has discovered that their Happy Honda Days event was stolen by the Grinch during Sunday television programming, leaving an empty Honda dealership and spreading unhappiness across the automaker's annual holiday campaign: https://youtu.be/bw68wjjIJHE. The Grinch canceled Honda's annual sales event because it was simply too happy and today, he has taken over the brand's Twitter channel (@Honda), where he shares unhappy and unmerry holiday comments, featuring the hashtag #GrinchTakeover. Fans will want to follow along to see what else the Grinch may be scheming — or if Happy Honda Days can be saved. 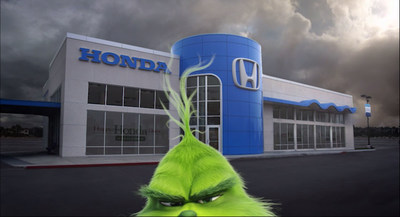 "As much of a cynical grump as the Grinch can be, we've got a hunch we can help him have a change of heart and save Happy Honda Days," said Susie Rossick, assistant vice president of Honda Marketing. "The Grinch is an iconic holiday character with a nostalgic appeal that entertains the whole family, and now he is putting a new spin on our Happy Honda Days sales event that is sure to break through the clutter of traditional holiday advertising."

Fans can tune into NBC's TODAY with Kathy Lee and Hoda on Nov. 20 and E!'s No. 1 Snapchat show, The Rundown, on Nov. 19 and 21 to see what else the Grinch is planning and if Happy Honda Days will become once again a joyful time of year.

In theaters now, The Grinch stars Academy Award®-nominated actor Benedict Cumberbatch as the voice of the title character in the story of a cynical grump who goes on a mission to steal Christmas, only to have his heart changed by a young girl's generous holiday spirit. Funny, inspiring and visually stunning, The Grinch tells a universal story about the redemptive power of kindness and the true spirit of Christmas. As a marketing partner of the film, Honda's campaign includes two TV commercials, digital media, social media posts and NBCUniversal custom content featuring the Grinch.

Honda's annual Happy Honda Days tradition continues in 2018, by helping shoppers re-live that childhood feeling of getting something they truly loved for the holidays, by getting a great deal on a new Honda as an adult.

Earlier this month the brand launched a follow-up to its beloved 2014 Happy Honda Days nostalgic "Toys" campaign featuring a new round of classic childhood toys, including favorites such as Voltron: Defender of the Universe, Care Bears, The Six Million Dollar Man, and Teenage Mutant Ninja Turtles. Honda's 2018 integrated Happy Honda Days campaign features these popular toys from the 1970s, 80s and 90s as spokespeople for the Honda Clarity, CR-V, Accord, Pilot and Ridgeline in TV spots, print advertising, in-dealership collateral, throughout digital media, on radio and across social media.

Through the magic of stop motion animation, Honda has brought these beloved throw-back toys to life. Original versions of the toys were actually used in the campaign, along with original voice talent.

Honda offers a full line of reliable, fuel-efficient and fun-to-drive vehicles with advanced safety technologies sold through over 1,000 independent U.S. Honda dealers. The Honda lineup includes the Fit, Civic, Insight, Accord and Clarity series passenger cars, along with the HR-V, CR-V and Pilot sport utility vehicles, the Ridgeline pickup and the Odyssey minivan.

Honda has been producing automobiles in America for more than 36 years and currently operates 19 major manufacturing facilities in North America. In 2017, more than 90 percent of all Honda brand vehicles sold in the U.S. were made in North America, using domestic and globally sourced parts.

Illumination, founded by Academy Award® nominee Chris Meledandri in 2007, is one of the entertainment industry's leading producers of event-animated films.  The company's franchises include three of the top-eight animated films of all time, and its iconic, beloved brands—infused with memorable and distinct characters, global appeal and cultural relevance—have grossed more than $5.8 billion worldwide.

Illumination was recently honored by Fast Company as one of the world's most innovative companies.

Illumination, which has an exclusive financing and distribution partnership with Universal Pictures, has garnered an extraordinary number of franchise successes for a studio just over a decade old.  As the creator of the hugely successful world of Despicable Me, which was recently crowned the top-grossing box-office animated franchise globally, Illumination has evolved the Despicable Me series to include Minions, the third-highest-grossing animated film of all time and the most profitable film in Universal's history, as well as the Academy Award®- nominated Despicable Me 2 and summer 2017's Despicable Me 3, which made more than $1 billion at the global box office.

Illumination recently launched two original properties that captivated audiences worldwide: The Secret Life of Pets, which achieved the best opening for an original movie, animated or otherwise, in U.S. history, and the global smash, Sing.

Founded 11 years ago with the mission of putting a smile on the face of every member of the audience, no matter their age, Illumination continues to imagine both original stories, as well as unexpected adaptations of beloved pre-existing works.