CHICAGO, Nov. 1, 2017 /PRNewswire/ -- With only 100 days remaining before the Opening Ceremony of the Olympic Winter Games 2018, United, the official airline of the United States Olympic Committee, announced its lineup of Team USA athletes who will represent the 'New Spirit of United' during the Olympic and Paralympic Winter Games in PyeongChang, South Korea. 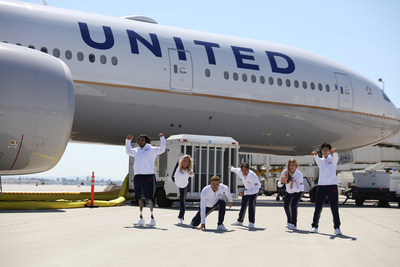 These athletes embody United's core values of flying together and working as one unified team towards success. They are role models both in and out of competition, and will represent United throughout the PyeongChang Games, and appear in a United U.S. Olympic-themed advertising campaign that will launch in January. United is proud to work with:

"The Olympians and Paralympians on Team USA work as a team to excel in their sports, set records, and bring home the gold," said Andrew Nocella, executive vice president and chief commercial officer at United. "It's that same dedication and teamwork that our own United employees put forward every day to connect hundreds of thousands of our customers to the moments that matter most to them."

The carrier has been the official airline of Team USA for close to 40 years, flying athletes, and their equipment and gear, to competitions around the globe. United maintains reservations agents dedicated to Team USA and their travel needs.

United is offering exclusive opportunities for MileagePlus customers to see Team USA in action at the Olympic Winter Games live in PyeongChang. United MileagePlus members have the chance of a lifetime to use their award miles to travel to South Korea and cheer on Team USA at the Olympic Winter Games. The airline will provide United Polaris business class tickets, four-star hotel accommodations, event tickets and much more throughout the trip. For additional details on this offer and to bid miles on this exclusive package, visit exclusives.mileageplus.com.

United is also the presenting sponsor of the Flying Ace All-Stars trampoline performance during the United States Olympic Committee's 100 Days Out Celebration in Times Square.

United Airlines and United Express operate approximately 4,500 flights a day to 337 airports across five continents. In 2016, United and United Express operated more than 1.6 million flights carrying more than 143 million customers. United is proud to have the world's most comprehensive route network, including U.S. mainland hubs in Chicago, Denver, Houston, Los Angeles, Newark/New York, San Francisco and Washington, D.C. United operates 751 mainline aircraft and the airline's United Express carriers operate 489 regional aircraft. The airline is a founding member of Star Alliance, which provides service to more than 190 countries via 28 member airlines. For more information, visit united.com, follow @United on Twitter or connect on Facebook. The common stock of United's parent, United Continental Holdings, Inc., is traded on the NYSE under the symbol "UAL".