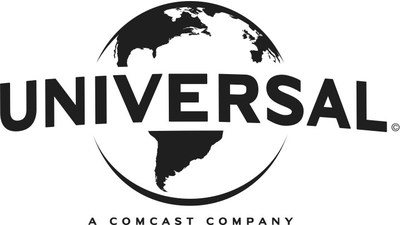 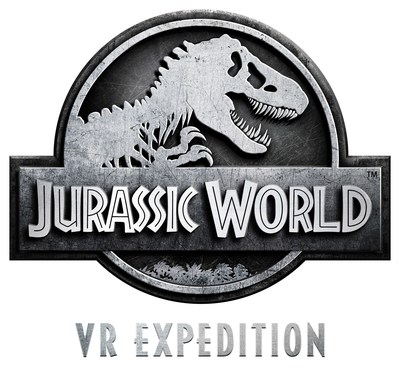 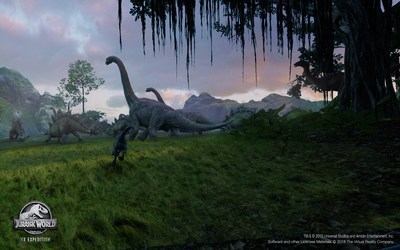 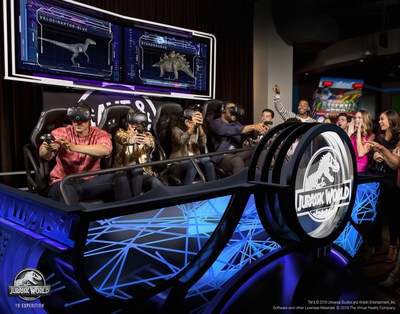 Up to four people at a time can put on an HTC VIVE™ headset and enter the Dave & Buster's state-of-the-art VR motion simulator, where they will be transported into what remains of Jurassic World for a five-minute suspenseful, awe-inspiring expedition. There, they will rescue dinosaurs that were freely roaming Isla Nublar at the end of the last chapter of Jurassic World.

"What we have done for this project is groundbreaking," added The Virtual Reality Company Co-Founder and Chief Creative Officer Robert Stromberg. "It represents a remarkable departure from the traditional approach to combining VFX and gameplay in VR. To achieve the level of cinematic visual integrity we would like to see in VR, we integrated a variety of filmmaking techniques to help complement established entertainment software approaches."

Jurassic World VR Expedition is the latest in a strategic expansion by Universal into gaming. Last year, Universal announced a significant build-up of its games team, as well as a more active approach and investment into game development. Jurassic World VR Expedition is the first VR production being released that is part of a bold portfolio of games rolling out in 2018 and beyond.

"For many, this will be their wondrous introduction to VR, and Jurassic World VR Expedition will transport fans in a more immersive way than they could imagine. Players will experience the dinosaurs—both the majestic and terrifying—first person," said Chris Heatherly, Executive Vice President of Games and Digital Platforms, Universal Brand Development. "We are thrilled with the breathtaking visuals and cinematic experience that VRC has delivered, as well as by Dave & Buster's bold step to make this experience available to such a broad audience."

"The exclusive launch of Jurassic World VR Expedition at all Dave & Buster's locations represents an incredible milestone for us as we aim to be at the forefront of location-based entertainment VR," said Kevin Bachus, Senior Vice President, Entertainment & Games Strategy, Dave & Buster's. "Our innovative, top-of-the-line simulators will provide fans with next-level immersion, putting them into Jurassic World for a breathtaking journey alongside the biggest creatures this world has ever known."

To try Jurassic World VR Expedition, players can find a Dave & Buster's location in their area or through Vive's Demo Locator. The game will be rolling out soon to additional location-based VR venues worldwide.

About The Virtual Reality CompanyThe Virtual Reality Company (VRC) is a content studio and production company that combines the best in narrative storytelling, technology, art and gaming to create compelling and immersive VR experiences for people around the world. Founded in 2014 by a team that included Chief Creative Officer Robert Stromberg, and CEO Guy Primus, VRC began with a team of award winning storytellers with a passion for innovation and a desire to explore and create a new way to share experiences and tell stories.  A two-time Oscar winner, Stromberg is recognized for designing many of the most iconic and artistic environments in recent cinema. With the emergence of VR, Stromberg has a new platform to create imaginative, emotional and immersive worlds that transcend the boundaries of traditional storytelling, such as the critically acclaimed and award winning "The Martian VR Experience," directed by Stromberg and produced by VRC for 20th Century Fox Innovation Lab and "Raising a Rukus", winner of the 2018 Lumiere Award for Best Animated Location Based VR experience. For additional information, visit www.thevrcompany.com.

About HTC VIVEHTC VIVE is the creator of the unprecedented PC-based virtual reality system, the VIVE, which was built and optimized for room-scale VR and true-to-life interactions. The VIVE ecosystem has evolved around its premium VR product portfolio, supported by VIVE X, the most active global VR/AR accelerator that has invested in over 80 start-ups, Viveport, a global content platform with the world's first VR subscription model that operates in more than 60 countries, and VIVE Studios, VIVE's VR content development and publishing initiative. VIVE is delivering on the promise of VR with game-changing technology and best-in-class content, bringing VR to consumers, developers and enterprises alike. For more information on VIVE, please visit www.VIVE.com.