ELKO, Nevada, May 20, 2020 /PRNewswire/ -- U.S. Gold Corp. (Nasdaq: USAU) (the "Company"), a gold exploration and development company, is pleased to announce the completion of the proposed 2020 drilling exploration program at its 20 square mile Keystone project, located in Nevada's Cortez Trend.  This program will potentially test several drill targets in areas previously untested and is intended to follow up on encouraging results from previous drilling. Upon commencement, drilling is planned to pursue Carlin-type and gold-silver skarn deposits in a variety of settings within the broader Keystone land package.  Drilling is intended to commence once appropriate funding is secured. 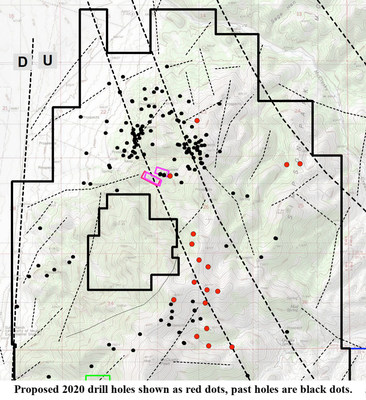 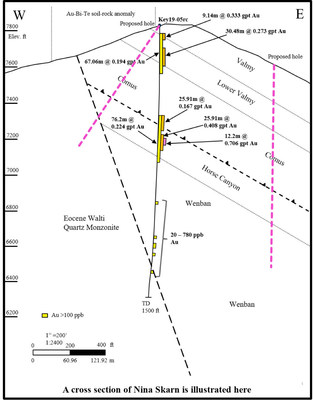 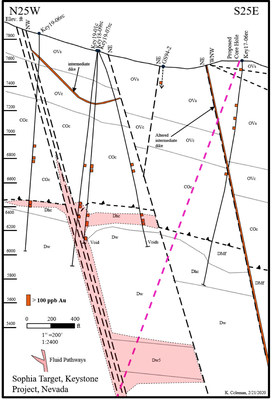 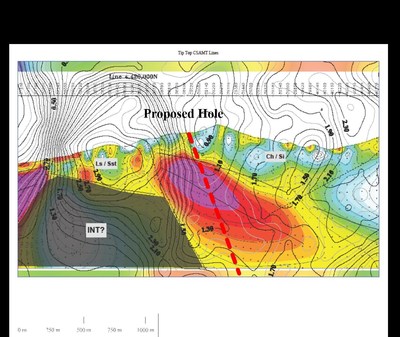 Ken Coleman, U.S. Gold Corp.'s Project Geologist, states: "We look forward to assessing these Keystone targets in 2020 upon securing sufficient funding.   The work we completed between 2016 and 2019 led to drilling the best hole to date at Keystone that we are aware of in 2019 Key19-05rc, in the Nina Skarn target area.  Planned drilling in 2020 is expected to follow up on the gold mineralization encountered at Nina Skarn, as well as at Sophia and Tip Top.  Additionally, several previously untested, gold-bearing skarn occurrences are expected to be drill tested, as are Carlin-type targets in the Greenstone Gulch target area."

Ken Coleman continues: "Our entire team is very much looking forward to the commencement of the 2020 Keystone drilling season, pending financing, re-opening of Nevada and BLM approval of cultural surveys.  We are waiting for the snow to melt and the property to dry out to allow access.  All of us were encouraged with our 2019 drilling results and feel strongly additional exploration efforts are warranted in the select target areas described above.  Extensive ongoing analysis has brought us to this point, and we are excited to continue to test Keystone's significant potential.  Encountering the strongest, thickest gold mineralization we are aware of at Keystone in 2019, in the Nina Skarn target, has demonstrated the presence of a strong, gold bearing Eocene magmatic system at Keystone."

For the 2020 planned exploration program, up to 22 angled and vertical drill holes are proposed within five high-potential target areas of Keystone.  Planned drilling is expected to be composed of a mix of reverse circulation (RC) and core, especially within the Sophia target area, where the most encouraging drill results are associated with extensive void development in Lower Plate rocks.  These areas include Nina Skarn, Sophia, Tip Top, Greenstone Gulch and Keystone Skarn.  Details for each target area are provided below, in order of priority.  For those targets with two or more holes proposed, one hole is expected to be drilled and then drilling is planned to progress to the next target in priority, to allow time for results to be returned and analysed.  Target concept cross sections are also provided for several of the targets.  See the attached property map illustrating the proposed 2020 drill hole locations:

The following provides a brief summary description of these prioritized 2020 Keystone drill targets:

Up to nine holes are planned in this target area to follow up on strong gold mineralization encountered in 2019 drilling, within hole Key19-05rc.  Key19-05rc encountered two thick intervals of oxidized, cyanide soluble, gold-bearing skarn mineralization, including 67.06m of 0.194 gpt Au and 76.2m of 0.224 gpt Au, starting from surface.  The 76.2m interval also contained an interval of 25.91m of 0.408 gpt Au.  Lower Valmy and Comus pyroxene skarn and hornfels are present at surface, coincident with a +2,000-foot-long gold-in-soil anomaly with up to 200 ppb samples and associated coincident anomalous Te-Bi-Zn-Ag.  This anomalous skarn zone is parallel to and appears confined to the east of a major NNW trending structural zone, which confines strong Carlin-style alteration to the south in the Sophia Target, and a strong NE trending structural zone at the north. The proposed 2020 drilling will expand upon Key19-05rc to the north and southeast, along the Walti Pluton contact and structures trending southeast toward the Mud Springs intrusion, respectively.  As-Bi-Te-Au in soil anomalies located along the western contact of the Mud Springs intrusion are expected to be drill tested as well.  Drilling is expected to test for both oxidized and reduced skarn style mineralization along and near the contacts of both intrusions.  A cross section of Nina Skarn is illustrated below:

Up to four holes are proposed to be drilled to follow up on previous drilling in the target area, especially holes Key18-09rc and Key18-03rc.  Hole Key18-09rc encountered over 350 feet of continuous oxidized breccia at the bottom, where it was lost at 1600 ft in a 20-foot-wide open void.  The oxidized breccia was located below a thick section of Comus skarn and hornfels, which yielded a 20-foot intercept of 1g+ gold in garnet-magnetite skarn.  The breccia at depth displays strongly anomalous gold, arsenic, thallium, mercury, antimony and many other elements, including thallium over 380 ppm.  Key18-03rc was lost in voids in the Wenban Unit 6, with associated silicified, gold-bearing and quartz-calcite-stibnite veined limestone. Extending from Key18-09rc and south-eastward, a strongly altered porphyritic dike set is present, along which the strongest Au and As surface rock and soil anomalies at Sophia are located.  Drilling is expected to be RC pre-collars with core tails to get through the extensive voids developed at the Horse Canyon-Wenban contact and down to the targeted Wenban Unit 5 host rocks, where the altered intermediate dikes are projected to intersect Unit 5.  The Sophia target area represents the largest As-Tl soil anomaly within the entire Keystone project.  A target cross section for Sophia is given below:

Two holes are planned in this area, which has seen no previous drilling.  Upper Plate Cambrian-Ordovician Comus Formation calcareous siltstones, limestones and greenstones are exposed at surface and are variably altered along NW and NE trending, partly dacitic dike filled structural zones.  Lower Plate Devonian rocks are expected at shallow depths below surface.  Surface soil and rock geochemistry shows a strong pathfinder element anomaly coincident with the NW structural zones.  Gold mineralization encountered in the Nina Skarn target area suggests the Greenstone Gulch area may be prospective for Carlin-type gold mineralization, in a similar geologic and structural setting as the Cove-McCoy mining district in Lander county, Nevada, another gold-polymetallic mineral rich, Eocene magmatic center.  Comus at Keystone is lithologically similar to the Hales Formation, the primary host rock of Carlin-type gold mineralization at the Tonkin Springs mine, five miles east of Keystone.  Targeting collapse breccias and bedding replacements developed in lower Comus, Devonian Horse Canyon-Wenban contact, and Wenban Unit 5.  See the attached figure below for the comparison, and a target cross section:

Three holes are planned at the Keystone Skarn target area, and three holes are planned at the Sophia Skarn targets, within the broader Sophia target area.  Holes at Keystone Skarn are expected be shallow, angled RC holes to test steeply dipping, high-grade gold bearing (27 gpt+ in rock chips), oxidized skarn developed along dikes emanating from the Walti pluton.  Previous drilling in the area tested the base metal rich skarn mineralization of the historic Keystone mine.  The high-grade gold occurrence is located east of the Keystone mine and has never been drill tested.  Holes at Sophia Skarn will test several coincident Au-Bi-Te soil and rock chip anomalies located between the Nina Skarn and Sophia Carlin-type target areas, using angled and vertical RC holes.  One hole is expected to follow up on the historic drill hole MP89-2/90-1, which encountered 51.8m of 0.253 gpt Au, including 3m of 2.2 gpt Au.  The map below illustrates the various gold-bearing skarn anomalies around the Mud Springs and Walti intrusions:

One hole is planned to follow up on previous drilling in the target area, that encountered encouraging gold and Carlin-style alteration and pathfinder geochemistry.  The target is located at the intersection of a major NNW trending structural zone with several NNE and NE trending fault zones that down-drop Upper Plate rocks against Lower Plate rocks.  The NNW structural zone is identified as a district scale mineralized conduit at Keystone. Surface soil and rock geochemistry shows a strong pathfinder and gold anomaly coincident with a large gravity low and chargeability high in the immediate target area.  Previous drilling has shown gold, Carlin-style alteration and oxidation are increased along the NNW structural zone. In addition, a long strike length, NW striking-shallow dipping structure was identified in previous drilling, with associated gold and dolomitization.  Targeting a Goldrush-style breccia deposit developed at the intersection of the broad NNW trending structural zone with the NW striking, shallow dipping structure, and collapse breccias developed in Wenban Unit 5 in the hanging-wall of the major NNW structural zone. See the target section below with CSAMT:

Certain statements in this shareholder letter are forward-looking within the meaning of the Private Securities Litigation Reform Act of 1995. These statements may be identified by the use of forward-looking words such as "anticipate," "believe," "forecast," "estimated," and "intend," among others. These forward-looking statements are based on U.S. Gold Corp.'s current expectations, and actual results could differ materially from such statements. There are a number of factors that could cause actual events to differ materially from those indicated by such forward-looking statements. These factors include, but are not limited to, risks arising from: the prevailing market conditions for metal prices and mining industry cost inputs, environmental and regulatory risks, risks faced by junior companies generally engaged in exploration activities, whether U.S. Gold Corp. will be able to raise sufficient capital to implement future exploration programs, COVID-19 uncertainties that may impact the ability to raise capital and conduct exploratory operations, and other factors described in the Company's most recent Annual Report on Form 10-K, Quarterly Reports on Form 10-Q, and Current Reports on Form 8-K filed with the Securities and Exchange Commission, which can be reviewed at www.sec.gov. The Company has based these forward-looking statements on its current expectations and assumptions about future events. While management considers these expectations and assumptions to be reasonable, they are inherently subject to significant business, economic, competitive, regulatory, and other risks, contingencies, and uncertainties, most of which are difficult to predict and many of which are beyond the Company's control. The Company makes no representation or warranty that the information contained herein is complete and accurate and we have no duty to correct or update any information contained herein.

U.S. Gold Corp. to Present Advancements in its Mining Assets at...