WASHINGTON, March 19, 2018 /PRNewswire/ -- Pro tennis star, Sloane Stephens, knows a thing or two about bouncing back. Rising from a broken foot and 957th world ranking, to winning the biggest tennis tournament in the U.S., her remarkable comeback story is a testament to her balanced approach to recovery and self-care. As she looks ahead to playing in Miami – and eventually defending her U.S. title this summer – Stephens will show how she bounces back after each grueling match and is BUILT WITH CHOCOLATE MILK. 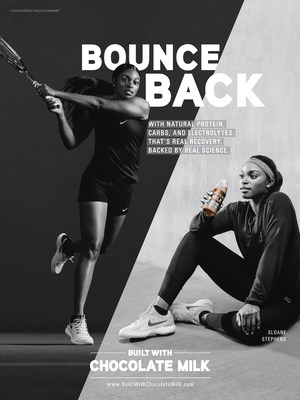 At 25 years old, Stephens is the first American woman in her generation to win a Major title on U.S. soil. But her preparation for the title was hardly textbook. Seven months prior, she had painful bone graft surgery to heal a broken foot, which left her off her feet for 12 weeks. As she battled through grueling rehab, she adopted a positive and determined mindset, focused on recovering victoriously. That same focus on recovery has been a constant through her career. For years, Stephens has trusted chocolate milk as the real deal for real recovery. Backed by 20+ studies, lowfat chocolate milk has high-quality protein to build lean muscle and nutrients to help muscles rebound.

BUILT WITH CHOCOLATE MILK: A Match Made in HeavenDubbed 'the next big thing in American tennis,' Stephens will be the face of the new national BUILT WITH CHOCOLATE MILK TV, print and digital campaign, debuting on April 2. Fans will learn her secret to bouncing back match after match and be able to watch exclusive content featuring the star athlete.

"For me, there are no shortcuts. Success takes real work and real recovery," said Stephens. "I've trusted chocolate milk for years. It has nutrients my body needs to get back on the court and gives me the confidence I need to come back practice after practice, match after match. And that's key for me because I believe that when you have confidence, you can do anything."

"Sloane has a powerful story centered around recovery and for years has trusted chocolate milk to help her bounce back, so she's the perfect match for the campaign," said Miranda Abney, Senior Marketing Director at the Milk Processor Education Program (MilkPEP), the group behind the BUILT WITH CHOCOLATE MILK campaign. "We have a rich history of diverse athletes, so we're delighted to have such a strong female voice and role model join our team to share with others why she chooses chocolate milk."

Chocolate Milk: Built With Science20+ scientific studies including athletes from sports spanning running, cycling, swimming, rock climbing and soccer support the benefits of recovering after strenuous exercise with the high-quality protein and nutrients found in lowfat chocolate milk. As part of a regular recovery routine, it's an ideal way to help athletes rebuild with high-quality protein scientifically shown to help repair muscles. In fact, drinking chocolate milk after a tough workout could give athletes a performance edge, according to a growing body of research. One study found that following an exhausting ride, trained cyclists had significantly more power and rode faster, shaving about six minutes, on average, from their ride time in a time trial later that same day when they recovered with lowfat chocolate milk compared to a carbohydrate sports drink or calorie-free beverage.i Other research suggests milk and milk's high-quality protein as part of a regular workout and recovery routine could support real results – including helping athletes gain more lean muscle and lose fat – when compared to athletes who recovered with a typical carb-only sports drink.ii, iii, iv

To learn more about the BUILT WITH CHOCOLATE MILK campaign, the real science behind the recovery benefits of lowfat chocolate milk, and to watch Sloane Stephen's TV spot and exclusive behind-the-scenes videos, visit BuiltWithChocolateMilk.com. Join the conversation using #RealWorks.