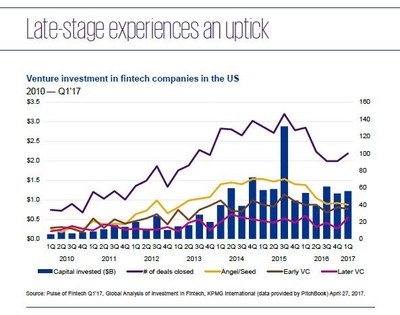 "The U.S. leads the rest of the world in the total value of fintech investment due to the large amount of funds available to invest in the market, with investors focusing on late-stage, clear front-runner fintech companies," said Anthony Rjeily, KPMG's U.S. Financial Services Fintech Practice Co-Leader.

The global market is seeing an increase in the breadth of fintech technologies and applications.

"Payments and lending continue to attract the most funding globally, although we're seeing increasing interest in a variety of technologies," said Brian Hughes, Co-Leader, KPMG Enterprise Innovative Startups Network, and National Co-Lead Partner, KPMG Venture Capital Practice in the U.S.  "In addition to continued growth in regtech and insurtech, areas such as artificial intelligence, machine learning and Internet of Things are gaining increasing investor attention."

Ann Armstrong, KPMG's U.S. National Fintech Co-Leader, said, "Corporations are looking into making fintech investments that can be integrated into their long-term strategies. There is a renewed focus on performance over potential, and alignment with the corporation's overall objectives."

U.S. Interest in Robo-Advisory and Insurtech IncreasesRobo-advisors and other hybrid advisory services continue to gain momentum in Q1'17 as financial institutions and banks recognize their value with both millennials and high net worth individuals, in providing better customer experiences and targeted services. Robo-advisory, AI and data analytics are expected to be hot investment areas in Q2'17.

Other Key Findings in the U.S.: