LOS ANGELES, April 6, 2020 /PRNewswire/ -- On April 3, 2020, V. James DeSimone Law filed a discrimination and hostile work environment lawsuit on behalf of Takesha Essombe, an African-American phlebotomist working at UCLA Hospital in Santa Monica and Westwood.  The lawsuit, titled Takesha Essombe vs. the UC Regents, Case No 20STCV13204, alleges that her Supervisors and coworkers engaged in a pattern of racially motivated discrimination, harassment, and bullying.  This culminated in her being immediately terminated from employment one week after she complained of the discrimination and harassment to her Supervisor Anthony Johnson.  (See Filed Attached Filed Complaint for Damages, Page 2, lines 19-28). 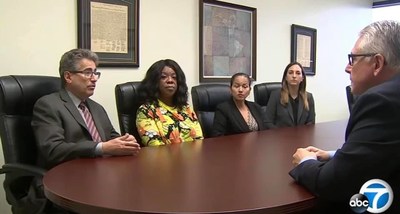 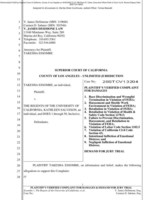 UCLA Hospital offered Ms. Essombe a per diem position less than a year later in August of 2019.  The timing was no coincidence. On August 6, 2019, a Los Angeles Superior Jury ordered the UC Regents to pay Nicole Birden $1.58 million dollars because of the racial harassment to which she was subjected while working as a phlebotomist at UCLA Hospital in Santa Monica. Nicole Birden v. UC Regents et al Case No. BC663189.  The UC Regents offered Ms. Essombe her job within weeks of the verdict.

Two years after Birden was subjected to harassment, the same coworkers and supervisors subjected Ms. Essombe to the same type of racially motivated discrimination, harassment, and bullying, according to the suit.   Like Ms. Birden, the newly filed lawsuit alleges that the same coworker addressed Ms. Essombe as "My N***a," the same coworkers subjected her to disparaging remarks about the color of her skin and they repeatedly racially stereotyped her in Spanish. The same coworkers allegedly harassed her through repeated calls to her work phone while she was drawing blood, piling an excessive workload, and tampering with blood samples by discarding them in the trash. Ms. Essombe is a very dedicated first responder, so after she complained about her blood specimens being thrown away and no corrective action was taken, she proceeded to hand deliver her specimens to the lab.

Further, like Ms. Birden, it is alleged that the UC Regents repeatedly denied Ms. Essombe career employment opportunities while other less qualified non- African American phlebotomists were hired to these career positions. Disturbingly, the lawsuit alleges that, two of the same supervisors that ignored the harassment against Ms. Birden resulting in the jury's verdict, ignored Ms. Essombe's complaints of harassment and engaged in harassment themselves, including use of the words "pickaninny" and "n****r" while engaging in blatant racial stereotyping.

The lawsuit also alleges that the UC Regents deny African-American phlebotomists a fair opportunity for career employment and relegate them to inferior shifts and assignments.

V. James DeSimone, representing both Birden and Essombe, explains: "UCLA Hospital treats its black phlebotomists as second class citizens.  When the employees complain, instead of taking appropriate corrective action, UCLA Hospital terminates them.  As someone who went to UCLA Law School, I believe it is more important than ever to hold the perpetrators of discrimination accountable so that the culture can be changed to one of respect and equality."

Co-Counsel Carmen Sabater, a former New York City Police Officer, added, "The role of First Responders is vital to our society, especially today during this pandemic. Phlebotomists are among these first responders we rely on to perform essential and sometimes imperative life or death blood draws. For this reason, a phlebotomist must be able to perform these duties in a work environment free from racial discrimination, hostility and bullying."

At V. James DeSimone Law, our Los Angeles employment law and civil rights attorneys are committed to justice. For over 30 years, we have been focused on representing individuals whose employee or civil rights have been violated. We believe no one should be a victim of such mistreatment, and passionately fight for the individuals who have been. Our team prides itself on being the tenacious advocates these individuals can rely on to pursue justice on their behalf. For more information, go to www.vjamesdesimonelaw.com.