LOS ANGELES, Feb. 3, 2017 /PRNewswire/ -- As Starbucks positions itself with a systematic decision to hire 10,000 Syrian refugees, Black Rifle Coffee Company (BRCC) and much of America asks why? While their attempts to capitalize on the veteran community have fallen grossly short, is it time now to make a puppet out of the very cultural diversity that founded this country for mere profit over security? Or is it time to put the power back in American citizens who need employment whose love, value and appreciation make today's freedoms possible? Let's be clear; the "American Dream" knows no prejudice against race, color, or ethnicity. It knows hard work. BRCC is welcoming 10,000 veterans to seek employment, training and or aid through them directly, as Starbucks has failed the military community in the hiring space. 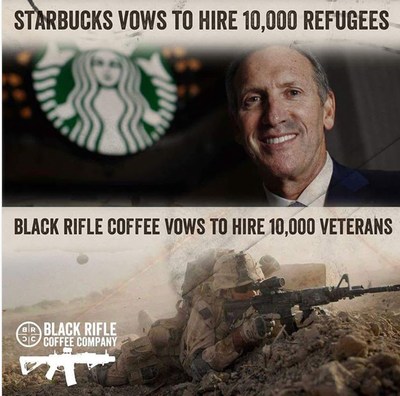 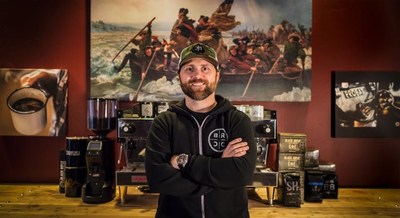 Founded in 2014 by CEO and former Green Beret Evan Hafer, BRCC was built upon the mission to provide a high-quality, roast-to-order, coffee to the pro-2A and veteran communities. Between deployments to Iraq and Afghanistan, Hafer worked to refine both his coffee roasting and firearms skills. He spent over a decade researching coffee, refining roast profiles and of course drinking while he roasted. BRCC stands for more than just a coffee company. It's a veteran-owned business operated by principled men who have served our country honorably and stand together to protect the business integrity, conservative values, the veteran community, and our families. They are the proud individuals who raise their right hand to support and defend the Constitution, who set aside aggressive social progressiveness to be what's important, kind, loyal, and protecting what they love: AMERICA. Just as committed to supporting the 15 thriving businesses beneath their umbrella as they are to the act of war, their brotherhood is stronger than commerce.

BRCC has consistently grown well over 700% since roasting their first batch of coffee just two years ago. Plans are in the works to open over 100 brick and mortar stores in the next three years and 500 in six years. Currently, the BRCC compound rests on 3.3 acres in downtown Salt Lake City and is already building an infrastructure for expansion. BRCC has teamed up with 5.11 Tactical and several other vetreprenuerial powerhouses to support its rapidly progressing operation. With escalating growth, comes obvious need to hire more employees. BRCC wants to remind the veteran community, "Starbucks says they are hiring Syrians because it makes for impressive PR. We hire veterans because it's who we are." While irate Starbucks patrons have been trading in their gift cards for cash at stores across the nation all week over this controversy, BRCC made a formal announcement on Instagram encouraging veterans to apply for future positions with their company by way of email to [email protected]

The inherent reality as a free society is the ability to vote with dollars. Repeatedly, conglomerates play on the emotional component of political prowess, by siding with the market best suited for their business endeavors versus standing for what they believe in as human beings. As a small business consistently faced with "schoolyard bullies" shoving and attacking every successful move BRCC makes, they refuse to stop serving their country, devalue patriotic predecessors, and watch American heritage being washed away in a storm of progressive, loutish intolerance. BRCC's sentiment of hiring veterans isn't for marketing propaganda, but how they have built their foundation. BRCC asks America, "Before you decide to vote with your hard earned dollar, what do YOU believe in?"