TORRANCE, Calif., April 27, 2020 /PRNewswire/ -- Championship-winning Acura-powered drivers Ricky Taylor and Trent Hindman are no strangers to high-tech, high-performance Acura racing machines, but neither had driven the other's class of IMSA race car. With a shared desire to try different equipment, each racer made the most of a unique opportunity to swap seats in the Acura ARX-05 DPi and Acura NSX GT3 Evo. Their candid experiences are captured in a new video from Acura, debuting today. 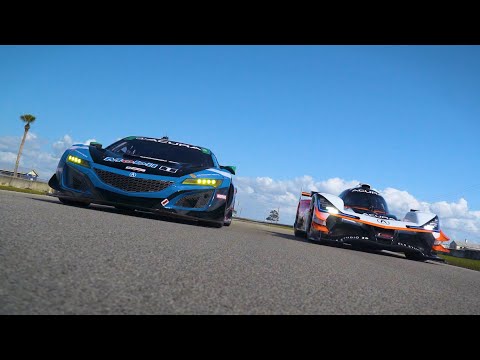 In early February, before social distancing guidelines went into effect, the two Acura Motorsports champions met at the famed Sebring International Raceway and climbed behind the wheel to drive a mile (or several) in the other's race shoes. Taylor normally pilots the Acura Team Penske ARX-05 in the IMSA Daytona Prototype class, while Hindman races the Acura NSX GT3 Evo in the IMSA GTD class for Meyer Shank Racing. Both drivers led their teams to class championships in the 2019 IMSA WeatherTech SportsCar season.

The differences between the two cars are stark. The NSX GT3 Evo is based on the production NSX supercar, sharing more than 80 percent of its underlying component parts, including the engine block, turbochargers and multi-material space frame. The Acura ARX-05, on the other hand, is a purpose-built race car constructed of lightweight carbon fiber, capable of generating 3,000 lbs. of downforce and powered by a 600-horsepower twin-turbocharged V6 based on the production J35-series engine found in the Acura MDX, TLX and RLX. While vastly different in terms of speed and capability, the two race cars share a track during most of the IMSA season, with DPi cars regularly passing the GT3 machines during races.

One of the most accomplished sports car racers in recent history, 31-year-old Ricky Taylor joined Acura Team Penske in 2018. Taylor started his career in karts, then moved to single-seat racing, winning the Skip Barber Southern Series in 2006, and the Skip Barber National Series in 2007, before moving to prototype racing in 2008. Taylor's accomplishments include an IMSA WeatherTech SportsCar Championship (2017) and 20 career victories in his 12 seasons of prototype racing. He's also competed at some of the biggest races in the world, including the 24 Hours of Le Mans and earned victories in the Rolex 24 at Daytona, 12 Hours of Sebring, Petit Le Mans and Long Beach Grand Prix. Taylor's performance in the 2019 IMSA season contributed to a Manufacturers' championship for Acura, and a Team championship for Acura Team Penske.

At 24 years old, Trent Hindman has already enjoyed an enviable racing career, beginning at age eight racing karts at Old Bridge Township Raceway Park and eventually winning the national karting championship in 2008. In 2009 he switched to formula cars, coming in fifth in the 2012 USF2000 championship. From there, Hindman graduated to sports car racing, and in 2014, became the youngest driver to win a Michelin Pilot Challenge championship at just 19-years old. Hindman joined Meyer Shank Racing (MSR) for three races in 2018, earning second-place finishes in the 24 Hours of Daytona and at Petit Le Mans. Completing the full 2019 season with MSR, Hindman and his co-driver Mario Farnbacher secured the GTD-class Team and Drivers' championships.