LOS ANGELES, March 23, 2017 /PRNewswire/ -- Viking Cruises (www.vikingcruises.com) today announced the rollout of its new onboard Viking Resident Historian program. Launching on Viking Star, Viking Sea and Viking Sky this month, a carefully selected faculty of historians will provide an enhanced level of enrichment for guests onboard all of Viking's ocean cruise ships. A new video on the Resident Historian program can be found on the Viking website. 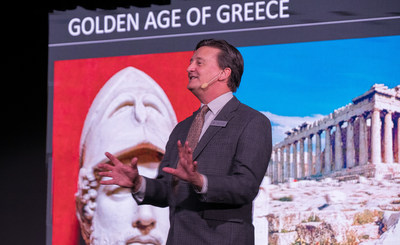 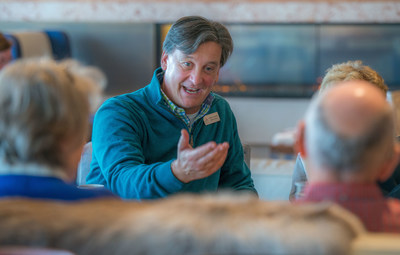 The Viking Resident Historians will provide guests with a high-level historical and cultural education that is specific to their journey, offering a framework for understanding the major chapters in world history. They will also conduct seminar-style roundtables – smaller, more intimate forums for discussion with guests, where the Viking Resident Historian will examine in-depth subjects related to their own area of specialization and/or particular areas of interest of the guests.

"Our guests are explorers – they are curious travelers who want to learn," said Karine Hagen, Senior Vice President of Viking Cruises, who leads Viking's enrichment efforts. "Having a fundamental understanding of iconic historical events in the destinations our guests visit helps bring a deeper understanding of the present – and perhaps also a better perspective on the future."

The Viking Resident Historian lectures are exclusively produced by Viking, under the tutelage of Dr. Charles Doherty, Chief Viking Resident Historian. The lectures are standardized as a core curriculum to guarantee consistency throughout the fleet, regardless of which Viking Resident Historian is lecturing. As with other onboard lectures, the Viking Resident Historian series will be presented in The Theater – and each will also be filmed and made available for guests on the in-room entertainment system. Additionally, the series is currently being professionally filmed in-studio, and in early 2018 will be available in its entirety on-demand through the in-room entertainment system on all Viking river and ocean ships. Charles Doherty, PhD, has lectured in more than 60 countries for The National Geographic Society, the Smithsonian and the American Museum of Natural History. Dr. Doherty received his doctorate from the University of Wisconsin–Madison and attended the Courtauld Institute in London as a Fulbright Scholar.

The first three Viking Resident Historians that will be featured onboard Viking's three ocean cruise ships this spring are:

The launch of the Resident Historian program is just the latest of several recent additions to the onboard cultural offerings for Viking Ocean Cruises, including:

Designed for discerning travelers, Viking offers "the thinking person's cruise" as an alternative to mainstream cruises. The Viking Difference is providing guests with extraordinarily well-designed journeys that bring them closer to the cultures of the world. Ships are small to get guests closer to their destination, with more time in port, more overnights and fewer days at sea. Onboard, guests find serene Scandinavian spaces, where every room is beautiful and functional, quiet and filled with light. All-veranda ships mean that guests experience every day with a new, expansive vista. With the most al fresco dining at sea, featuring regional cuisines and always-available American classics, Viking's guests can truly dine in their destination. A focus on cultural enrichment brings immersive experiences onshore and onboard. And only The Viking Way brings guests itineraries that feature Local Life, Working World and Privileged Access experiences.

In addition, Viking Inclusive Value provides a small ship experience at a big ship value – with every cruise fare including a veranda stateroom, shore excursions in each port of call, all onboard meals, and all port charges and government taxes. Guests also enjoy many complimentary amenities as part of their fare, including: beer and wine with lunch and dinner service; premium dining reservations; Wi-Fi; self-service laundry; access to the Thermal Suite in the LivNordic Spa; and 24-hour room service—an included value of more than $200 per person, per day for an average cruise.

Viking Cruises, the leader in river and small ship ocean cruising, offers destination-focused itineraries designed for experienced travelers who have an interest in geography, culture and history. In its first year of operation, Viking Ocean Cruises was rated the #1 ocean cruise line in Travel + Leisure's 2016 "World's Best" Awards, which came on the heels of being rated the highest of all cruise lines in the 2015 "World's Best" Awards. Viking currently operates a fleet of 62 vessels, offering scenic cruising along the rivers and oceans of the Americas, Europe, Russia, Egypt, China, and Southeast Asia. By 2019 the company will operate six 930-guest ocean cruise ships and will sail itineraries in Scandinavia and the Baltic, the Western and Eastern Mediterranean, Asia, Australia, North America and the Caribbean. In addition to the Travel + Leisure honors, Viking has also been honored multiple times on Condé Nast Traveler's "Gold List" as well as recognized by Cruise Critic as "Best Overall" Small-Mid size ship in the 2017 Cruisers' Choice Awards, "Best River Cruise Line" and "Best River Itineraries," with the entire Viking Longships® fleet being named "Best New River Ships" in the website's Editors' Picks Awards. For additional information, contact Viking Cruises at 1-855-8-VIKING (1-855-884-5464) or visit www.vikingcruises.com.