LOS ANGELES, Oct. 5, 2020 /PRNewswire/ -- Viking® (www.viking.com) today marked new accolades and impressive milestones for its enrichment channel, Viking.TV (www.viking.tv). Viking.TV went live in mid-March in the early stages of the COVID-19 pandemic and was conceived as a way to build community, stay connected and share positive experiences while people are staying home, rather than traveling. Now six months later, Viking.TV has broadcast more than 160 sessions featuring original cultural content and virtual Privileged Access to interesting people and places around the world. The digital platform, where all content is free to watch, has resonated well with people during this unusual year. Livestreams and archived content on Viking.TV have been enjoyed by more than two million viewers, which include past Viking travelers and Viking crew, as well as those who have not traveled with Viking. Additionally, Viking.TV was recently honored with the "Breakthrough Award for Product Innovation" in the 2020 Silver Travel Award. 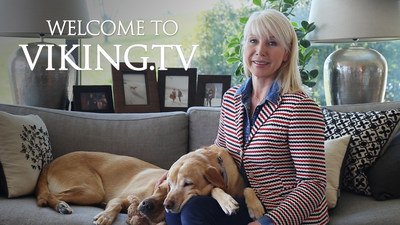 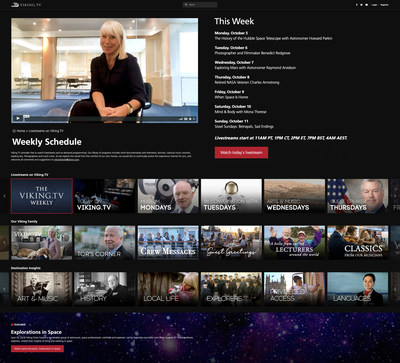 "There is no doubt that we are living in an unusual time that has disrupted all of our lives. It is well known that having a daily routine is important during times of stress and isolation, so we launched Viking.TV to livestream at a set hour each day, when our guests, crew and other curious people can continue to explore the world and have a daily session of positivity and learning," said Karine Hagen, Executive Vice President of Viking. "After just six months, we are honored to have welcomed so many esteemed viewers on Viking.TV and to have received such positive feedback. We look forward to once again traveling together, but in the meantime, we are pleased to continue fostering the Viking.TV community—with daily livestream sessions and conversations with some of the world's most fascinating people."

Livestream sessions on Viking.TV start every day at 2 p.m. Eastern Time / 11 a.m. Pacific Time, and all content is archived and available on-demand for anyone who cannot view at the original time of the broadcast. Also on Viking.TV there are more than 200 original short-form Destination Insight documentaries and 60 additional pieces of content in from Viking Cultural Partners, with programming from TED, BBC's Wonderstruck, Libera and more.

As Viking.TV continues to plan new content, each month will feature one week dedicated to a single theme. This week is dedicated to taking viewers out of this world with space-themed content. Beginning today, "Space Week" features Viking Resident Astronomer Ray Arvidson speaking about the exploration of Mars; a conversation with photographer Benedict Redgrove, creator of the book NASA: Past and Present Dreams of the Future; and Anne Diamond will interview retired NASA veteran Charles Armstrong, who worked on a variety of projects including the Space Shuttle. The week will be capped by a special At Home Friday—"When Space is Home"—with broadcast journalist Lynn Sherr hosting a conversation between Dr. Anna Fisher, godmother of Viking Orion®, and three additional astronauts: Colonel Jack Fischer, Richard Linnehan and Barbara Morgan.

Many travelers continue to write Viking with comments of appreciation for this new opportunity to explore the world in comfort…from home. Examples of viewer feedback include: