SAN FRANCISCO, Jan. 24, 2018 /PRNewswire/ -- Postmates, the only on-demand delivery app that can deliver anything from anywhere, today announced a "We Get It" 360 brand marketing campaign that captures how on-demand 'anything' is quickly becoming a way of life -- particularly in the app's largest market of Los Angeles. From Phở, aspirin and coffee runs for the office, to street tacos and a pint of Halo Top for dinner, to a bottle of vodka to make it through the evening onslaught of cable news -- Postmates helps millions of people each month get anything they need, anytime they need it -- delivered to their door in minutes. The campaign is a cheeky nod to Postmates' growing place in the lives of time-pressed, information-overloaded and traffic-constrained Angelenos, in particular. 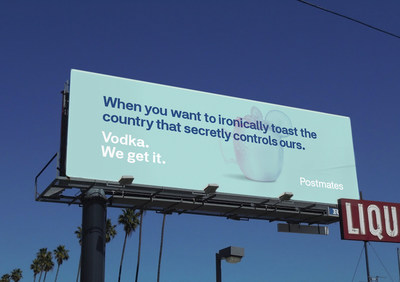 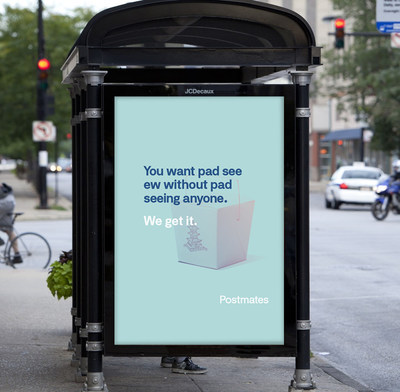 The "We Get It" campaign was inspired in part by some of Postmates' 2017 order trends -- from the 139% rise in açaí bowl orders and all things vegan in Santa Monica, to the spike in alcohol orders at some key points in the political discourse in 2017. For more on the on-demand trends that inspired the campaign visit the Postmates blog.

"We often hear from our users that the ability to postmate anything, from anywhere, feels magical, like they've acquired a new superpower," said Lizz Niemeyer, director of brand marketing at Postmates. "The campaign was inspired by the inventiveness and sense of humor of our loyal customers, millions of whom use Postmates as a way of life rather than an app -- particularly in LA."

Developed with Postmates' creative agency-of-record 180LA and media agency partner MBMG,  the 'We Get It' campaign brings to life the "superpower" of Postmates' on-demand offering through OOH billboards, bus shelters, wild postings and interactive extensions across Los Angeles and nationally via digital and podcast extensions. Headlines from the "We Get It" campaign include:

"'We get it' sets out to demonstrate to the people of Los Angeles not only what Postmates does -- literally get you stuff -- but also how Postmates gets the city, and the countless reasons why the people in it need the things they need," said Jason Rappaport, creative director at 180LA. "We've developed more than 50 bespoke executions throughout the city that speak specifically to LA's different neighborhoods, iconic restaurants, food trends and life situations and that will resonate with the people here. Working in close collaboration with MBMG, we were able to strategically select custom locations tied to our creative. We're taking a fun, tongue-in-cheek run at this city with this campaign, and if nothing else, it gives the people of LA something to look at while driving, other than their phones."

Postmates is the largest on-demand delivery network in the Los Angeles market -- with about a million local deliveries made each month. Postmates continued its meteoric growth in Los Angeles this past year, with continued geographic expansion and a 73 percent year-over-year increase in sales. According to the market research firm, NPD Group, there are now about 1.7 billion food deliveries made annually and others have estimated that the sector is growing by 40 percent year-over-year.

To toast the new campaign, Postmates has teamed up with the ACLU to pledge $2 per Drinks order through February* to support their important work. For more on Postmates' community efforts and the ACLU pledge, visit the Postmates blog. Postmates is also offering a 30-day free trial for Unlimited, its  subscription service -- which offers free deliveries from an almost unlimited range of restaurant, drinks, essentials and grocery partners.

In 2017, Postmates introduced its first alcohol and grocery collections -- Drinks and Fresh -- in major markets, including Los Angeles. Sourcing from local partners, Drinks customers can order from a wide selection of beer, wine and spirits for delivery in 25 minutes or less. The Fresh collection curates high quality, locally-sourced groceries -- like kale, avocados and a niman ranch filet for a last-minute dinner, delivered in 30 minutes on average. Postmates Unlimited subscribers do not pay delivery fees on +250,000 merchants, when they spend $20 or more, for $9.99 per month. Visit Postmates.com or download the Postmates app on iOS or Android.

Photos of Postmates "We Get It" creative can be downloaded at: https://drive.google.com/drive/folders/1rbX4atg-7QdVx5pY9ewHhMk6QHzr66Qy.

ABOUT POSTMATESPostmates helps people unlock the best of their cities – and their lives, with an insanely reliable on-demand "anything" network. Launched in 2011, Postmates has the largest on-demand delivery fleet in the U.S. of more than 150,000 Postmates operating in more than 50 U.S. metropolitan markets. It provides access to over 250,000 merchants and completes more than 2.5 million deliveries a month. Headquartered in San Francisco, with 550 employees, Postmates is building a movement. Have chips but no guac? Postmate it. Your date night? Postmate it. Game day? Postmate it. Run out of caffeine? Postmate it. Learn more:  www.postmates.com.

ABOUT 180180 is an award-winning international creative micro-network with offices in Amsterdam (180 Kingsday), Los Angeles and a strategic alliance in China. A part of Omnicom Group Inc. (NYSE: OMC), 180 employs 200 people from over 30 countries. 180 specializes in consumer, brand and product strategy and offers a spectrum of expertise, including: content creation, digital marketing, retail marketing, design, data sciences, social media and advertising. For more information, go to www.180LA.com.