BEIJING, Nov. 22, 2019 /PRNewswire/ -- Recently, the online singing campaign "Singing the Same Song of My Motherland and Me", co-organized by CCTV-Business Channel, Tencent Group and WeSing (online Karaoke application from Tencent Music Entertainment Group), was officially recognized with a Guinness World Records title for being the 'Largest online audio album of people singing the same song'. 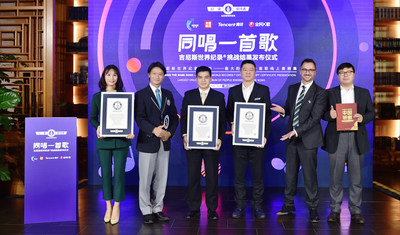 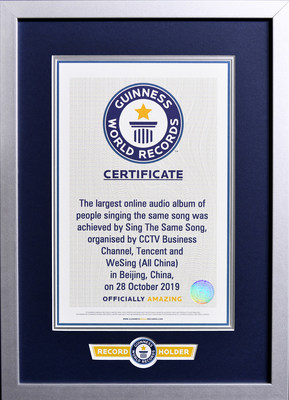 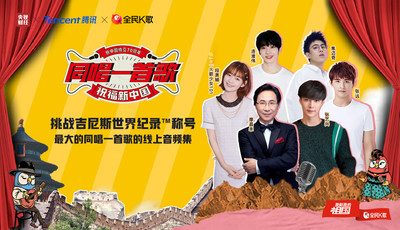 Guinness World Records Global President Alistair Richards also sent his congratulatory message as "Guinness World Records was originated in Britain and had been measuring, verifying and recording the world's achievements since 1954. Our mission is to maintain an archive of records that inspires, engages and entertains people across the globe and celebrates the world's best. Of the thousands of applications we receive every month, less than 5% actually make it to become an official entry in our archive. The 'Singing the Same Song' campaign has become part of the prestigious database of Guinness World Records."

On September 12, CCTV-Business Channel, together with Tencent Group and WeSing, launched an online chorus campaign "Singing the Same Song", calling for Chinese people singing the classic song My Motherland and Me on WeSing. Since it launched, the campaign has attracted more than1 million WeSing users uploading their own karaoke recordings of a national day celebration song through WeSing's Quick Sing feature.

Leveraging AI technology, WeSing converted the voices of over one million participants into a choir version of My Motherland and Me. The version of the song which was launched simultaneously on the WeSing and QQ Music, quickly rose to the 4th spot in the QQ Music Top Chart. Meanwhile, with more than 6 million users having sung this version since its released on WeSing. The great enthusiasm shown for the song on the two platforms again aroused the national patriotism.

"'Singing the Same Song' has attracted millions of users to express their patriotism by singing the classic song My Motherland and Me. We are grateful to all participants for jointly setting the Guinness World Records for the largest online audio album of people singing the same song. As a popular online Karaoke app, WeSing is dedicated to empowering everyone to sing and express their emotions confidently, whenever and wherever, with our advanced technology and great fun of versatile music and social interactions," said Dennis Hau, Tencent Music Entertainment Group Vice President.

Besides China, WeSing has also created a craze in Southeast Asia. On Google Play, for two consecutive quarters, it has been the No.1 music and audio app by downloads in the Philippines, and for the third quarter of 2019, it was the top 2 music and audio app by downloads in Indonesia, Thailand, and Malaysia. Moreover, WeSing has also gained a high daily recommendation rate by Google Play in Southeast Asia. A Great number of users from these areas, after joining the WeSing network, have brought in massive amounts of songs, videos and social engagements to the platform.