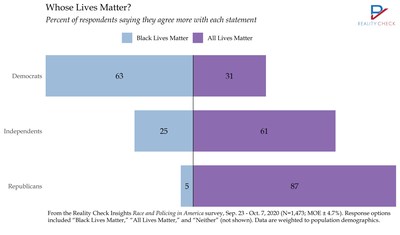 A Crisis of Confidence in our Police?

U.S. Public Split on Whether Recent Protests are Non-Violent

How the public views police, protests, and the NBA

"This survey shows that one month before the 2020 U.S. presidential election, attitudes toward the police, protests, and even the NBA are highly partisan. We also see evidence of public concern with the police.  More than a third of the public disagrees with the statement that `police officers treat racial and ethnic groups equally' and just over half of Americans agree that `seeing a police officer in my neighborhood makes me feel safe.'"

See attached for the complete toplines and crosstabs.

Methodology: Reality Check Insights' Race and Policing in America Survey was conducted from Sept. 23 – Oct. 7 (N=1,473; MOE ± 4.7%). Respondents were recruited through both random address-based sampling (where respondents completed interviews either online (via smart phone or computer) or by calling a toll-free number) and opt-in online sampling.