OMAHA, Neb., Aug. 15, 2017 /PRNewswire/ -- You're running late to a high-stakes job interview when a train approaches a railroad crossing along your route. Do you hit the gas, beating the train across the tracks, or stop to let it pass? The choice is yours in Union Pacific's interactive public railroad safety campaign released today on Facebook, YouTube, Hulu and online news sites. Watch and share videos on social media to help family and friends prevent tragedies on railroad tracks. 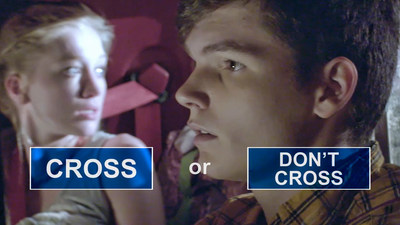 "Trains cannot swerve or stop quickly, unfortunately for drivers and pedestrians, trains follow the rails forward hitting anyone or anything in their paths," said Cameron Scott, Union Pacific executive vice president and chief operating officer. "Train accidents are preventable if people actively think about their safety at railroad crossings and choose to stop and patiently wait for approaching trains."

According to the Federal Railroad Administration, 94 percent of train-vehicle collisions can be attributed to driver behavior or poor judgment. Union Pacific's safety campaign highlights risky driver and pedestrian behaviors in videos dispelling misconceptions that a train's enormous size and sounds are obvious warnings that prevent people from getting hit.

Union Pacific's YouTube videos put viewers in the driver's seat as hurried motorists approaching railroad tracks. Viewers choose the ending by clicking a 'cross' or 'don't cross' option. Each choice leads the driver to a different ending and reminds viewers it's worth the wait to spend a few minutes letting trains pass at railroad crossings.  Union Pacific's "Curfew" video follows a teenage boy hurrying to get his date home before curfew and racing to beat an approaching train at a railroad crossing. Viewers decide what happens next.

Photos off the Tracks

In a second set of videos, Union Pacific uses animation to address pedestrian safety and the dangers of taking photographs on railroad tracks. Two videos separately feature a young man and woman posing for photos in the middle of busy roads, making it obvious people would not take photos there. A clear, open railroad track follows with the question, "Why would you take your picture here?" A loud approaching train breaks the silence highlighting that taking pictures in both locations is a bad idea resulting in similar outcomes.

Two additional animated video spots address the dangers of taking selfies on railroad tracks. One features a soccer fan taking a selfie on the middle of the field during game action and another shows young women taking selfies in front of landmarks. While there are many unique and safe places to take selfies, Union Pacific reminds viewers that railroad tracks are not among them.

Union Pacific dispels the myth that loud, enormous roaring trains warn people to move before getting hit in an animated video beginning with an open track on a sunny day. It compares soft, natural outdoor sounds to the sound of an approaching train. A message explains most of the train's noise is behind the lead locomotive – people may not hear it until it's too late.

It takes knowledge to make educated decisions and Union Pacific encourages viewers to share the rail safety videos with friends and family. For more information and requests for rail safety presentations at no charge, please visit UPCARES.COM.

Union Pacific Railroad is the principal operating company of Union Pacific Corporation (NYSE: UNP). One of America's most recognized companies, Union Pacific Railroad connects 23 states in the western two-thirds of the country by rail, providing a critical link in the global supply chain. In the last 10 years, 2007-2016, Union Pacific invested approximately $34 billion in its network and operations to support America's transportation infrastructure. The railroad's diversified business mix includes Agricultural Products, Automotive, Chemicals, Coal, Industrial Products and Intermodal. Union Pacific serves many of the fastest-growing U.S. population centers, operates from all major West Coast and Gulf Coast ports to eastern gateways, connects with Canada's rail systems and is the only railroad serving all six major Mexico gateways. Union Pacific provides value to its roughly 10,000 customers by delivering products in a safe, reliable, fuel-efficient and environmentally responsible manner.