NEW YORK, Aug. 21, 2017 /PRNewswire-USNewswire/ -- Chasing the Dream, WNET's multi-platform initiative on poverty and opportunity, and Tumblr are launching a campaign on Monday, August 21, to create a conversation around the issues presented in My Everyday Hustle, a five-part original digital series that debuted on the Chasing the Dream website on July 14. It was announced today. 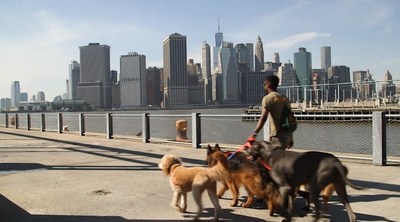 Shot in New York City, My Everyday Hustle, offered five first-person accounts revealing the struggles and successes exploring the challenges of New Yorkers who support themselves and their families in jobs that are often overlooked.

Chasing the Dream is teaming up with Tumblr for a Sponsored Day activation that drives to THIRTEEN's Tumblr page where the community will be encouraged to share their own stories with the prompt: "What's Your Everyday Hustle?"

"We are pleased to be collaborating with Tumblr on using this series to create a larger conversation about the daily hustle of everyday people. These stories are vital to understanding what is happening today with our American Dream of striving for a better life," said Geraldine Moriba, Executive Producer, "Chasing the Dream."

Chasing the Dream: Poverty & Opportunity in America –My Everyday Hustle

The five individual episodes of My Everyday Hustle have been packaged into a half-hour program and will air tonight, Friday, August 18 as a MetroFocus Special at 5 p.m. on WLIW21; 5:30 pm on NJTV; and 6 p.m. on THIRTEEN.

Chasing the Dream: Poverty & Opportunity in America is WNET's multi-platform public media initiative providing programming on poverty, income equality, and opportunity. Since 2015, the initiative has produced reports, including news segments, documentaries, and radio and digital stories. These stories have been seen by a cumulative 14.7 million viewers on television alone and the Facebook postings have had over 3.5 million impressions.