SEATTLE, March 5, 2018 /PRNewswire/ -- Wreckage from the USS Lexington was discovered on March 4, 2018, by the expedition crew of Research Vessel (R/V) Petrel, which is owned by Microsoft co-founder and philanthropist Paul G. Allen. The Lexington was found 3,000 meters (approximately two miles) below the surface, resting on the floor of the Coral Sea more than 500 miles off the eastern coast of Australia. 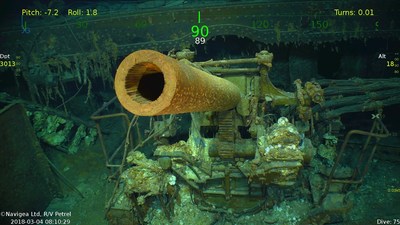 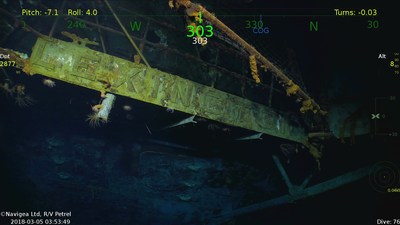 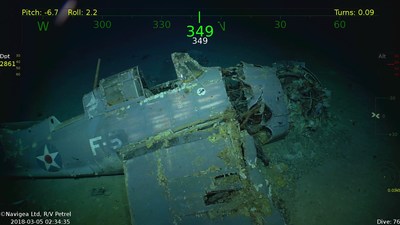 "To pay tribute to the USS Lexington and the brave men that served on her is an honor," Mr. Allen said. "As Americans, all of us owe a debt of gratitude to everyone who served and who continue to serve our country for their courage, persistence and sacrifice."

As one of the first U.S. aircraft carriers ever built, the Lexington became known as "Lady Lex" and went down with 35 aircraft on board.

"Lexington was on our priority list because she was one of the capital ships that was lost during WWII," said Robert Kraft, director of subsea operations for Mr. Allen. "Based on geography, time of year and other factors, I work together with Paul Allen to determine what missions to pursue. We've been planning to locate the Lexington for about six months and it came together nicely."

The USS Lexington was originally commissioned as a battlecruiser but was launched as an aircraft carrier in 1925. She took part in the Battle of the Coral Sea (May 4-8, 1942) along with the USS Yorktown against three Japanese carriers. This was the first carrier versus carrier battle in history and was the first time Japanese forces suffered a permanent setback in its advances on New Guinea and Australia. However, the U.S. lost the Lexington and 216 of its distinguished crew.

The Lexington had been hit by multiple torpedoes and bombs on May 8 but it was a secondary explosion causing uncontrolled fires that finally warranted the call to abandon ship. The USS Phelps delivered the final torpedoes that sank the crippled Lady Lex, the first aircraft carrier casualty in history. With other U.S. ships standing by, 2,770 crewmen and officers were rescued, including the captain and his dog Wags, the ships ever-present mascot.

During the Battle of the Coral Sea the Japanese navy sank USS Lexington (CV-2), USS Sims (DD-409), and USS Neosho (AO-23), and damaged the USS Yorktown. The Japanese lost one light carrier (Shōhō) and suffered significant damage to a fleet carrier (Shōkaku).

"As we look back on our Navy throughout its history, we see evidence of an incredible amount of heroism and sacrifice. The actions of Sailors from our past inspire us today," said Sam Cox, Director of the Naval History and Heritage Command and retired U.S. Navy Rear Adm. "So many ships, so many battles, so many acts of valor help inform what we do now."

The Battle of the Coral Sea was notable not only for stopping a Japanese advance but because it was the first naval engagement in history where opposing ships never came within sight of each other. This battle ushered in a new form of naval warfare via carrier-based airplanes. One month later, the U.S. Navy surprised Japanese forces at the Battle of Midway, and turned the tide of the war in the Pacific for good.

Based on some initial success with his M/Y Octopus, Mr. Allen acquired and retrofitted the 250-foot R/V Petrel with state-of-the-art subsea equipment capable of diving to 6,000 meters (or three and a half miles). Since its deployment in early 2017, the ship was active in several missions in the Philippine Sea before its transition to the Coral Sea off the Australian Coast.

Allen-led expeditions have also resulted in the discovery of the USS Indianapolis (August 2017), USS Ward (November 2017), USS Astoria (February 2015), Japanese battleship Musashi (March 2015) and the Italian WWII destroyer Artigliere (March 2017). His team was also responsible for retrieving the ship's bell from the HMS Hood for presentation to the British Navy in honor of its heroic service. Mr. Allen's expedition team was permanently transferred to the newly acquired and retrofitted R/V Petrel in 2016 with a specific mission around research, exploration and survey of historic warships and other important artifacts.

The following links are recommended resources about the USS Lexington provided by the Naval History and Heritage Command (more available at www.history.navy.mil):

https://www.history.navy.mil/our-collections/photography/wars-and-events/world-war-ii/battle-of-the-coral-sea/battle-of-the-coral-sea--events-of-8-may-1942/damage-on-board-uss-lexington--8-may-19/80-G-16805.html  Damage in the port forward 5-inch gun gallery on USS Lexington (CV-2), from a Japanese bomb that struck near the gallery's after end during the Battle of the Coral Sea, 8 May 1942. View looks aft, with the ship's number two 5/25 gun in the foreground, still manned and in operation. Number four 5/25 gun is immediately beyond, trained out to port and aft. Official U.S. Navy Photograph, now in the collections of the National Archives. Catalog #: 80-G-16805

Mr. Allen is deeply committed to honoring our past and the lessons it provides to our future. He has created public spaces including the Flying Heritage and Combat Armor Collection, MoPOP and the Living Computer Museum + Lab — where people learn and interact with historic, cultural and musical heritage. The inaugural Seattle Art Fair helped put the city on the map as one of the premier art destinations in the country. He also thinks globally, making impact investments that will help developing countries expand their health and infrastructure and nurture a diversified economy.

Many of his ventures were seeded in his youth, and reflect the depth and diversity of his passions. Honoring his father's service in World War II, Mr. Allen is especially interested in collecting and protecting the artifacts that speak to the heroism and service of that day. His recently acquired Research Vessel Petrel provides a platform to search for historic artifacts that have been lost at sea.