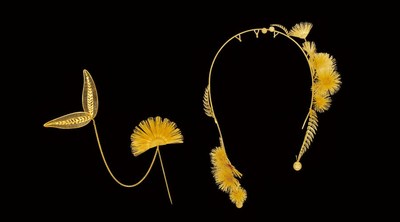 Over its nine-month run, the competition drew international attention and made a significant impact in the global jewellery industry by revitalising the gold wedding jewellery segment. It harnessed global talent and created a platform to modernise and elevate the product segment.

The "Xifu" Grand Prize was awarded to Wang Xiaomei from Beijing. Her plain gold design "XiuHeHuan" was a gold wedding jewellery set consisting of a headpiece and a pair of earrings that are connected to each other. "The design symbolises a family unit where two become one to make each other a better person," said Wang. The five judges all agreed that the piece was extremely innovative, original and creative, and awarded it the competition's highest honours.

In the Plain Gold category, the first prize was awarded to Yi Ran. The young designer from Beijing created a set of four pieces named "Track". Yi explained, "The design is made of a unique structure with ento-ectad circle layers. The movable circles can form the Chinese word 'He' (oneness), symbolising perfection and women's hopes for a happy marriage."

Turkish designer Meltem Sahan received the second prize in the plain gold category for a two-piece design with the theme, "Tree of Life," in homage to women.

Three third prizes were awarded to Chen Wenmei from Shenzhen, China; Krishma S Jain from India; and Jiang Hao from Shanghai, China. Chen's two-piece set with a hairpin and a ring named "SanShengTaoHua" was inspired by the Burr Puzzle. She said, "The Burr Puzzle's mortise and tenon are put together to form a secure joint, which also applies to the concepts of Yin and Yang, and oneness." Jain built her two-piece set of a headpiece and a bracelet on the "Wheel of Energy" concept, a tribute to the innate beauty of each human being. Young designer Jiang, meanwhile, centred her three-piece set "XiangShengXiangHe," on haploids, saying "not only do they represent wellness, the swirls of hexagons also allude to movement, like a newlywed couple dancing in the swirl of love."

In the Gem-set Gold Jewellery category, the First Prize went to student Xu Min, who bested many experienced competitors. Taking "YongHe" as the theme, Xu said "the design is inspired by water particles, formed by two chemical bonds that are simple yet inseparable, akin to marriage."

Huang Xiangmin received the second prize for "HeXie," a two-piece set with a necklace and a pair of earrings with red spinels that symbolise "the compatibility of two people from different backgrounds, whose love transcends cultural differences through understanding and acceptance."

The first third prize went to Huang Xuting, a Shenzhen student whose winning design "ShuangQi" used the colour green to represent romantic encounters; orange, growing up in love; and red, the joy and success of love. The design is inspired by love birds and connected branches, both traditional Chinese concepts of love." Ronaldo Buensalida from the UAE bagged the second third prize for his two-piece "Metal Memory" set of a necklace and a pair of earrings with pearls and gems. According to Buensalida, "marriage is like metal, therefore the hardness and strength of pure gold and metal symbolise the theme of 'Oneness.'" Sun Hao from Shenzhen received the last third prize for "HeMingYunDuan," which he described as "a poetic picture with clouds and cranes, traditional Chinese symbols of good luck."

The Organising Committee expresses its gratitude to all parties involved in the Competition's great success. It appreciates the support of teachers and students from design institutes, the extensive coverage by media in mainland China and international markets, and the feedback from the global industry. It wishes all the winners a bright future, and the gold wedding industry vitality for the next milestone.