Pivotal Corporation was founded in 2014 by David Donovick and Eli Almo with the belief that personal technology can make life not only better, but specifically, healthier. Powered by science and research, the company decided to launch its family of products and software with a device that was familiar and accessible—a fitness tracker. The twist? The Pivotal Living band has a low $12 price point, roughly the price of three cups of coffee. David and Eli knew PR and marketing would be key to early success and sales, and selected Duo PR, a Seattle agency to make it happen.

Breaking into a Crowded Market

How do you successfully launch a product in a crowded market where huge brands like Apple, Fitbit, and Microsoft have already established market share? To answer that question, Northwest start-up Pivotal turned to Duo PR—a progressive boutique agency with extensive experience supporting consumer brands. Playing up the sleek design of Pivotal’s new wearable device, unique membership model and jaw-droppingly low price point, Duo PR crafted a product story for the new fitness tracker in a way that would resonate with mainstream media like USA Today, technical influencers like Engadget and GeekWire, and early adopter consumers who would not only order, but help create additional buzz for the product.

A Campaign that Engages Media & Consumers with Compelling Visuals

To launch the Pivotal Living band and drive early sales for its first health and wellness product, Duo PR recognized that the announcement had to have incredible reach—both out of the gate and over time. This result would come from a curated mix of media previews and product demos, targeted 1:1 media outreach at launch, and the national distribution of an eye-catching and consumer-focused press release.

By coordinating previews with New York, San Francisco and Seattle tech and health media in the two weeks prior to launch, Duo PR could align the first round of product coverage for the Pivotal Living fitness band with the official launch announcement made via PR Newswire.

Knowing that multimedia assets would be most effective at telling the story of the new band and the innovative membership model, Duo PR worked with the PR Newswire team to create and distribute a multimedia news release with a branded landing page which included five photos, a press release with a catchy headline, “Three Reasons You Should Buy This Fitness Band,” and a prominent call to action to drive customers to the pre-order site.

“We made the decision to go with a Multimedia News Release for three main reasons,” said Rebecca Mosley, Duo PR co-founder and senior strategist on the Pivotal Corporation account. “First, the Pivotal Living band and app are both sleek and well-designed, and we wanted our announcement to have a big visual impact on both media and consumers; the multimedia photo gallery allowed us to do that. Second, the call-to-action button, Pre Order Now, was a key driver for pre-orders and nearly 25 percent of people who visited the announcement landing page clicked through to www.PivotalLiving.com.

And finally, the Multimedia News Release landing page was able to serve as a press hub, where Duo PR could direct media to view the press release and easily download visual assets and the press kit. This was a huge asset for the PR team and for Pivotal Corporation, as we were still working with a skeleton website and shopping cart at launch.”

“In the end, the launch and pre-orders for the Pivotal Living band exceeded expectations,” said Mosley. “Luckily, Pivotal Corporation had a dedicated manufacturing team that was able to increase production, and a responsive team that was able to get all preorders— generated by the media buzz—fulfilled and shipped for the holidays.”

“The Multimedia News Release was a tremendous asset for the PR team to have in support of the launch efforts,” continued Mosley. “At the end of the day, even with success metrics in place to measure the ROI of the release, when you see such staggering sales and a surge in web traffic coming off a launch, that’s what really moves the needle for our clients. It’s certainly a formula we’ll look to replicate in the future.” 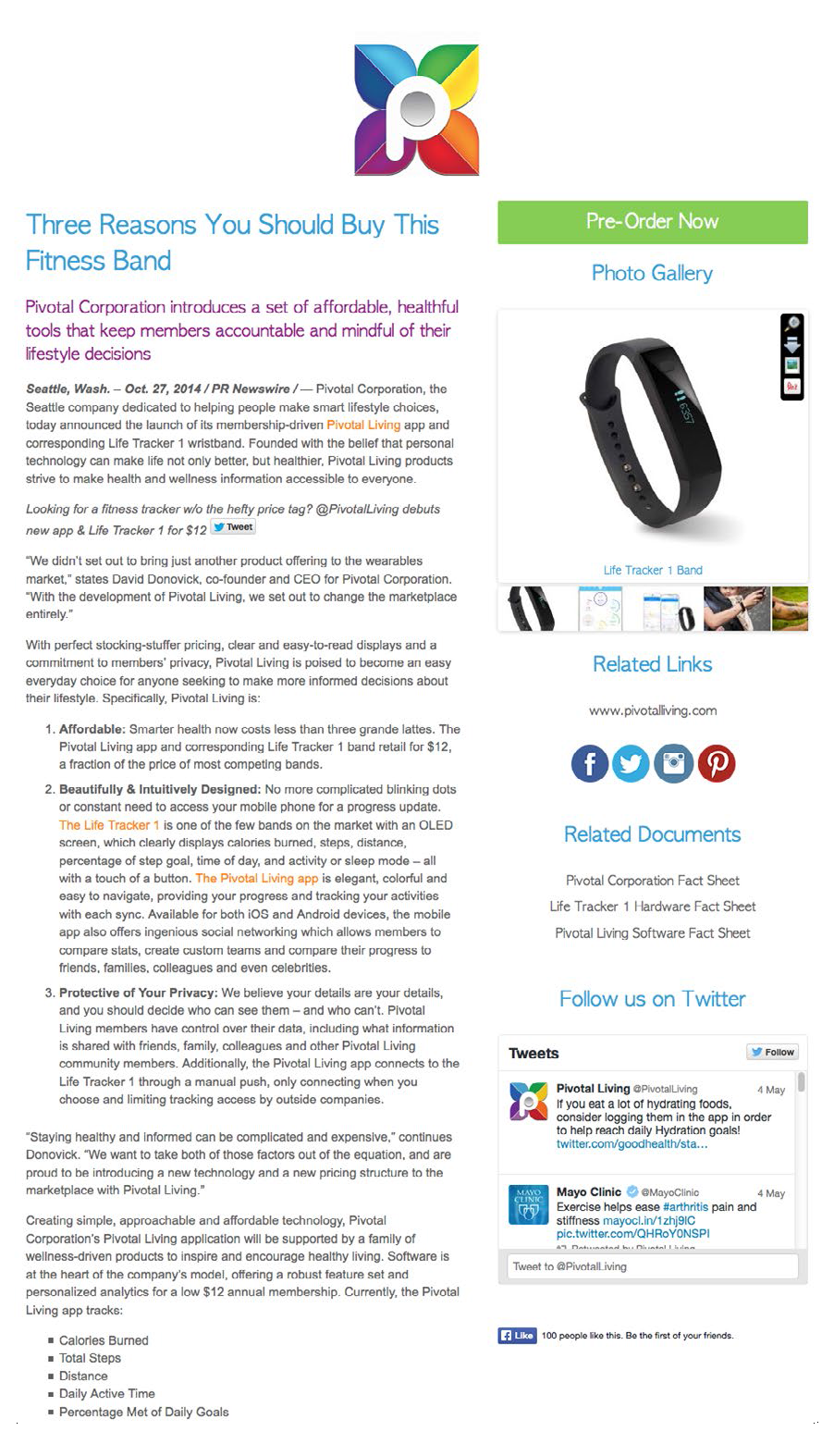 “The Multimedia News Release was a tremendous asset…when you see such staggering sales and a surge in web traffic coming off a launch, that’s what really moves the needle for our clients. It’s certainly a formula we’ll look to replicate in the future.”