This new charity initiative is designed to support women who are pursuing their dreams in content creation, while raising awareness for the continued gender gap in financial funding for young women in the ever-expanding gaming and broadcasting space. As part of the event, 1DF is introducing the Twitch BroadcastHER Grant, which will directly benefit female content creators.

The Streams for Dreams charity event, #Stream4Dreams, will be featured on Twitch and kicks off on March 1 and ends midnight on April 1. The campaign leverages the reach and impact of 10 popular female Twitch broadcasters who will help encourage viewers to donate to the program. As an incentive, 1DF will provide T-shirts and other items. Among the featured broadcasters -- who range from gamers and makers to dreamers and doers -- are Friskk, Gillyweedtv and theluckmusic, with more to be announced.

Through Streams for Dreams, 1DF is also hoping to fuel greater participation and foster a more diverse roster of women from all backgrounds that aspire to become successful Twitch content creators.

"As an organization committed to all dreams, we are excited to partner with members of the Twitch community on this amazing new campaign," says 1,000 Dreams Fund founder and CEO Christie Garton. "The initiative will not only raise critical funds, but will also boost awareness around the shortage of support for these creative young women in the digital broadcasting space."

With that aim, 1DF is also announcing the launch of 1,000 Dreams Fund's Twitch BroadcastHER Grant, created specifically to help female content creators transition their passion into a career. All funds raised during the Streams for Dreams event will go directly back to women broadcasters in need through this new funding program. Grants, ranging from $500 - $2,000, will be awarded to four or more female Twitch creators in 2018 for items that align with 1DF's funding mission. This includes conference travel, equipment upgrades, workshops, and more.

"1DF's vision for their Streams for Dreams initiative is inspiring since it aligns perfectly with Twitch's mission to help creators make a living entertaining and educating their fans," said Andrew Schroeder, Director of Charity Partnerships, Twitch. "The event will elevate the importance of greater gender equity during Women's History Month and is a wonderful opportunity for members of the Twitch community to engage with this issue, while giving back through 1,000 Dreams Fund's Twitch BroadcastHER grant."

For many, broadcasting on the Twitch platform is no longer a side hustle. It can be a lucrative pursuit with top performers earning a living by broadcasting full-time. However, women on all social platforms face unique challenges such as the gender gap in financial funding and the continued push to command respect for their talents.

"Many of the problems women face are because of lack of respect," says Twitch broadcaster Tina "shadowfoxx086" Degenhart. "But gaming is just another platform that we shouldn't shy away from. The industry won't understand how to treat women if we don't show them how to treat women."

Since its launch in late 2015, 1,000 Dreams Fund has given more than $100,000 to more than 100 young women to help fund the "hidden costs" of their career and education goals, such as conference fees, unpaid internships and training.

To learn more about Streams for Dreams, visit https://tiltify.com/1000dreamsfund/streams-for-dreams

About the 1,000 Dreams Fund The 1,000 Dreams Fund (1DF) is a national scholarship fund for American girls in high school and college. 1DF believes that big expenses should never stand in the way of big dreams. Since its launch in November 2015, over $100,000 in funding has been granted to talented young women in need, helping them pay for the "extras" in school like study abroad, tech devices for the classroom and travel to conferences and seminars. 1DF has been featured in NBCNews.com, USA Today, MarketWatch, Forbes, Huffington Post, Chicago Tribune, Entrepreneur, TODAY and others. To learn more about 1DF, visit http://1000dreamsfund.org/

About Twitch Twitch is the world's leading social video service and community for gamers. Each day, millions of community members gather to watch, talk, and chat about shared interests. Twitch's video service is the backbone of both live and on-demand distribution for all types of content, including the entire video game ecosystem, the creative arts, vlogging (IRL), and more. Twitch also runs TwitchCon, the annual convention for celebrating the Twitch community. For more information about Twitch, visit our Press Center, Twitter feed (#Twitch), and Blog. 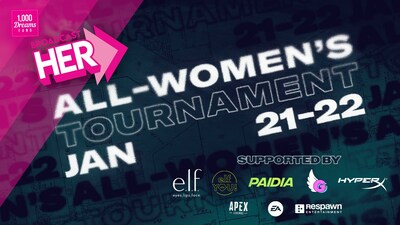 1,000 Dreams Fund and HARMAN Partner for a 6th Year to Help Empower Women in Tech through New Face Of Tech Scholarship Program