LOS ANGELES, May 18, 2017 /PRNewswire/ -- Judy D. Olian, chairman of the G. and R. Loeb Foundation Inc. and dean of UCLA Anderson School of Management, has announced the finalists of the 60th Anniversary Gerald Loeb Awards for Distinguished Business and Financial Journalism. She also revealed the recipients of the Lifetime Achievement Award and the Lawrence Minard Editor Award. 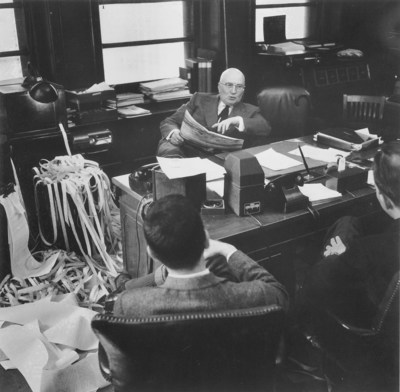 The 2017 Lifetime Achievement Award recipient is Walt Mossberg, executive editor at The Verge and Editor-at-Large for Recode. This annual award recognizes an individual whose career exemplifies the consistent, superior insight and professional skills necessary to further the understanding of business, financial and economic issues.

Nicholas Varchaver, assistant managing editor at Fortune, will receive the 2017 Lawrence Minard Editor Award, named in memory of Laury Minard, founding editor of Forbes Global and a former final judge for the Loeb Awards. This award honors excellence in business, financial and economic journalism editing, and recognizes an editor whose work does not receive a byline or whose face does not appear on-air for the work covered.

Mossberg and Varchaver will receive their career achievement awards at the 60th Anniversary Gerald Loeb Awards banquet and celebration on Tuesday, June 27, 2017, at Capitale in New York City. The 2017 winners in the 12 competition categories, which represent the nation's highest honors in business journalism, will also be announced during the banquet.

The banquet and celebration will also commemorate Gerald Loeb's 1957 creation of the awards and recognize his legacy to encourage journalism on business and finance that informs and protects the private investor and the general public. Gerald Loeb was a founding partner of E.F. Hutton, a guest columnists for Forbes Magazine and widely considered a Wall Street iconoclast.

This year's show will be hosted by Tyler Mathisen, co-anchor of CNBC's Power Lunch, with additional presenters, from television news, announced in the coming weeks. This event is attended by the country's most influential journalists, editors, publishers, producers, media personalities and celebrities. The official invitation for the 60th Anniversary Gerald Loeb Awards – with ticket, table, sponsorship and advertising information – can be viewed at http://www.theloebawards.com.

The following 2017 #LoebAwards finalists were chosen from more than 480 entries submitted by local, regional and national outlets:

About UCLA Anderson School of ManagementUCLA Anderson School of Management is among the leading business schools in the world, with faculty members globally renowned for their teaching excellence and research in advancing management thinking. Located in Los Angeles, gateway to the growing economies of Latin America and Asia and a city that personifies innovation in a diverse range of endeavors, UCLA Anderson's MBA, Fully-Employed MBA, Executive MBA, Global Executive MBA for Asia Pacific, Master of Financial Engineering, Master of Science in Business Analytics, doctoral and executive education programs embody the school's Think In The Next ethos. Annually, some 1,800 students are trained to be global leaders seeking the business models and community solutions of tomorrow. Follow UCLA Anderson on Twitter or on Facebook

Winners of the 2022 Gerald Loeb Awards Announced by UCLA Anderson ...