"A Date with China", an international media tour with the theme of "On Road to Prosperity", kicked off Monday morning in Zhashui county, Shangluo city of Northwest China's Shaanxi province.

The Shaanxi tour will take foreign media correspondents in China, foreign internet celebrities in China and Chinese journalists to experience in depth the province's achievements in poverty alleviation, rural revitalization and opening-up.

At the launch ceremony of the tour, Zhang Yong, deputy director of the Cyberspace Administration of China's news and communications bureau, said that China's complete victory in eradicating absolute poverty is a magnificent undertaking and the targeted poverty alleviation campaign plays a key role.

"Families and individuals in many poverty-stricken regions in China like Zhashui county have shed off poverty and led well-off lives. This transformation of their destinies is a miracle from China's fight against poverty," he added.

The international media tour is aimed at facilitating global understanding of China's development, he said.

Wu Wengang, vice-mayor of Shangluo city, viewed the tour as a good chance for building the city's global reputation, as the city is striving to make structural adjustments and promote reform and innovation for economic growth.

"The city will not cease the pace of opening-up and will continue to contribute to the nation's high-quality development and construction of a fully modernized socialist country," Wu said.

Representatives from Chinese and foreign media also expressed their expectations for firsthand observations during the tour.

Li Jun, deputy editor-in-chief of China Daily website, said the tour will be a great opportunity to experience China's great changes after eliminating poverty. "There are many real and vivid stories on this land for us to discover," she added.

Joao Pimenta, a Portuguese journalist of Lusa News Agency, expressed his interest in Xi'an, the capital city of Shaanxi province. He said the city played an essential role in the operation of China-Europe freight trains. "These trains have been especially important to keep trade going during the COVID-19 pandemic," he commented.

Rao Jianjun, editor-in-chief of cnwest.com, said the Qinling Mountains in Shaanxi not only are an important symbol of Chinese culture, but also abound with natural resources. The tour will offer a glimpse of how local people benefit from environmental protection, industrialization of agricultural products, and the Belt and Road projects, he added.

"A Date with China" is a three-leg media tour to be held from April to September. The first leg features Shaanxi, Hubei and Guizhou provinces as well as Guangxi Zhuang autonomous region.

The tour is directed by the Cyberspace Administration of China's news and communications bureau and co-organized by China Daily website and 11 provincial-level cyberspace administrations. 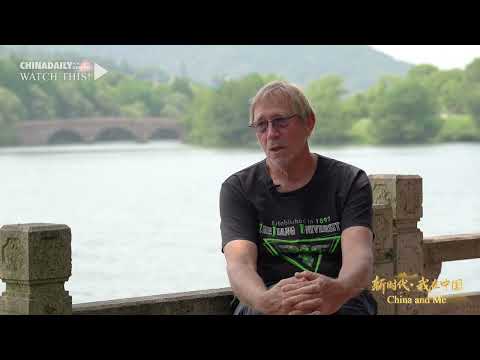 China and Me: Picking up sailing dream in Hangzhou...