NEW YORK, May 22, 2019 /PRNewswire/ -- Today, Absolut Vodka® unveils its latest initiative as Planet Earth's Favorite Vodka in support of creating a more sustainable, and accepting, society for all. In partnership with global non-profit organization GLAAD and Pride festivals across the country, Absolut is honoring the past 50 years of Pride by paying homage to the people, protests and protagonists who have taken a stand alongside the LGBTQ community fighting for visibility and acceptance. 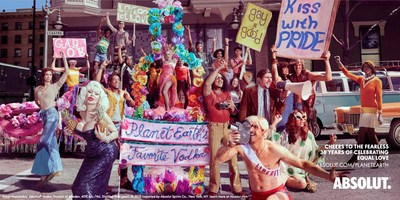 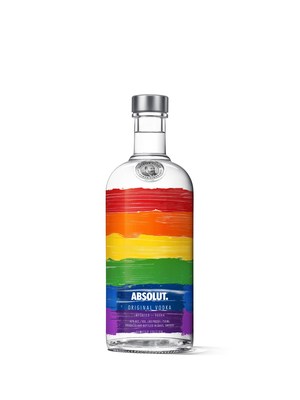 As the first spirits brand to publicly support the LGBTQ community 38 years ago, Absolut is proud to be a brand known for fearlessly celebrating diversity, acceptance and equality. Today, as Planet Earth's Favorite Vodka, Absolut believes in the power of uniting generations – past, present and future – as a way to learn from yesterday, take action today and celebrate a brighter future for tomorrow.

"Supporting the LGBTQ community back in 1981 was a risky decision for mainstream brands, when taking a stand for equality meant going against conventional culture," said Regan Clarke, Brand Director, Absolut, Pernod Ricard USA. "Today, we want to continue pushing the envelope of cultural progress in inclusivity and acceptance, while taking a moment to celebrate the people and actions that have made that progress possible."

Bridging the Past & Present to Spark Conversation - Campaign Photographer: David LaChapelle2019 marks the 50th anniversary of the Stonewall uprising, a series of protests that served as a catalyst for the gay rights movement in the U.S. and around the world. In honor of this historic movement, Planet Earth's Favorite Vodka, Absolut, commissioned renowned photographer David LaChapelle to remember the spirit of the marches and protests of the late 1960's through one impactful image that honors those who have been fighting for the rights and visibility of the LGBTQ community.

"The image created for the Absolut campaign is an inclusive tribute to diversity and celebration.  A picture is worth a thousand words," said photographer David LaChapelle.

Featuring a variety of well-known faces, voices and GLAAD activists from the LGBTQ community – including Sasha Velour, Amanda Lepore, EJ Johnson, Jason Rodriguez, Alexandra Grey and more – David LaChapelle and Absolut aim to bring a contemporary lens to this historic moment in LGBTQ history in order to spark conversation and awareness for continued progress.

Celebrating People & Pride 24/7/365 with GLAAD & Pride Events Coast-to-CoastAs Planet Earth's Favorite Vodka, Absolut's commitment for the future is one that never stops progressing. At the heart of this commitment is an ongoing dedication for not only doing what's right for the planet – but also what's right for its people, including celebrating LGBTQ communities all year long. To help do this, Absolut has teamed up with global non-profit and LGBTQ media advocacy organization GLAAD on a multi-year partnership to support GLAAD's work accelerating acceptance for LGBTQ people and provoking dialogue that leads to cultural change every day.

"As we celebrate the past 50 years in the fight for LGBTQ equality and visibility, GLAAD is honored to partner with Absolut, a brand that has helped to support the LGBTQ community for decades," says Zeke Stokes, GLAAD's Chief Programs Officer. "Absolut's commitment to celebrate the LGBTQ community all year long, and not only during Pride month, is a shining example of how brands can bring inclusivity, diversity, and acceptance to the forefront of their mission."

This year, in partnership with GLAAD, Absolut is bringing people together to celebrate and promote LGBTQ progress with festivals and activations across the country – including:

New Bottle, Who 'Dis?In addition to bringing people together during Pride season, Absolut is letting people show their pride all year long with its latest rainbow-inspired bottle – hand-painted with the colors of the rainbow flag on the outside and Absolut Original Vodka on the inside.

The bottle, for the first time, will have nationwide, year-long distribution allowing everyone, everywhere to prove that their pride is all year long. Available for an MSRP of $19.99 at major retailers and online at bit.ly/AbsolutPrideBottle.

Pernod Ricard USA is based in New York, New York, and has roughly 650 employees across the country. Pernod Ricard USA urges all adults to consume its products responsibly and has an active campaign to promote responsible drinking. For more information on this, please visit: www.responsibility.org.

About GLAADGLAAD rewrites the script for LGBTQ acceptance. As a dynamic media force, GLAAD tackles tough issues to shape the narrative and provoke dialogue that leads to cultural change. GLAAD protects all that has been accomplished and creates a world where everyone can live the life they love. For more information, please visit www.glaad.org or connect with GLAAD on Facebook and Twitter.

1No purchase necessary, must be 21+ US resident. Registration ends 6/15/19. See official rules on AbsolutPride.com. Void where prohibited.