NEW YORK, Feb. 14, 2020 /PRNewswire/ -- On a day when people around the world have romance top of mind, Absolut is launching Drink Responsibly. #SexResponsibly – a bold new campaign to help spark a conversation on the role of consent in safe, healthy sex. 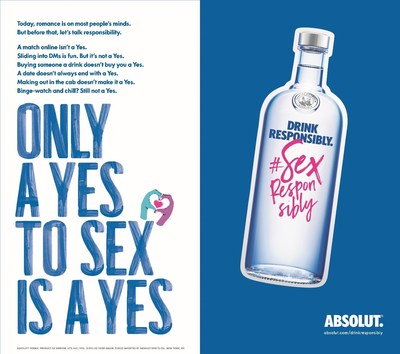 Using the chronology of a date to break down different stages of consent, the campaign puts a spotlight on how people do (or don't) address consent in their own lives. From sliding into DMs, to buying someone a drink, to sharing a ride to the next destination, we make it clear that Only a Yes to Sex Is a Yes. Because sex without consent is sexual assault.

The campaign includes out of home, print, digital and social advertising – supported by a roster of influencers and a partnership with RAINN, the nation's largest anti-sexual violence organization.

"In a recent survey conducted with 21-30 year olds for Absolut by KRC Research, we learned that nine in 10 have talked about consent with their friends and family, and that nearly one-third said they talk about the topic of consent frequently or all the time," said Ann Mukherjee, chairman and CEO of Pernod Ricard North America. "Additionally, 61 percent said they believe companies should play a role in tackling this issue. When you pair that data with the startling reality that every 73 seconds, an American is sexually assaulted – frequently involving the perpetrator's misuse of alcohol – you can understand why we feel compelled to take a stand on the issue of consent."

Absolut's partnership with RAINN will help even more survivors of sexual assault each year and continue the organization's vital work to educate the public, prevent sexual violence, and ensure that perpetrators are brought to justice. Importantly, Absolut will work with RAINN to develop and implement new, culturally-relevant campaigns and programs that aim to prevent all people from using alcohol as a tool or excuse to violate consent.

"We look forward to working with Absolut to tackle the important issue of consent head-on, and to use this partnership to advance cultural understanding of the problem and create real-world solutions," said Scott Berkowtiz, president of RAINN. "We are excited by the potential for the brand's reach to call attention to this important issue."

On Valentine's Day, Absolut will engage consumers via social media. For every share or retweet of our campaign, Absolut will donate $1 to RAINN. Donations from the Valentine's Day engagement will be in addition to an initial donation to support RAINN's work from Absolut. Mukherjee will become a member of RAINN's National Leadership Council on behalf of Absolut.

Absolut has also committed to take action in support of responsible drinking and consent by:

To learn more about our campaign, visit absolut.com/drinkresponsibly. If you or someone you know has been affected by sexual violence and need to talk, free and confidential support is available 24/7 via RAINN's National Sexual Assault Hotline at 800.656.4673 and online.rainn.org.

As "creators of conviviality," we are committed to sustainable and responsible business practices in service of our customers, consumers, employees and the planet.  Our products bring people together and serve a valuable role in society. We encourage responsible consumption of our products and fight alcohol misuse in society by evolving our business and our marketing, taking action on harmful drinking and engaging with our stakeholders for real change. As a founding member of the Foundation for Advancing Alcohol Responsibility (Responsibility.org), we are proud to be a part of the campaigns that have worked to produce a 29% reduction in underage drinking over the past 10 years.

To Amplify Connection and Cultural Relevance Across Its Brands,...