BAYONNE, N.J., Feb. 5, 2020 /PRNewswire/ -- Henry Repeating Arms President and Owner, Anthony Imperato, designed and donated 60 rifles for 4-year-old Beckett Burge of Princeton, Texas, and 66 rifles for 3-year-old Sadie Kreinbrink of Ostrander, Ohio to assist with the medical expenses associated with their leukemia treatments. The firearms were sold directly through Henry Repeating Arms' website and sold out within hours, and serial number 1 of each edition brought in a total of $8,650 at auction on gunbroker.com. The Burge family is receiving $35,525, and the Kreinbrink family is receiving $45,725 from the sale of these rifles. 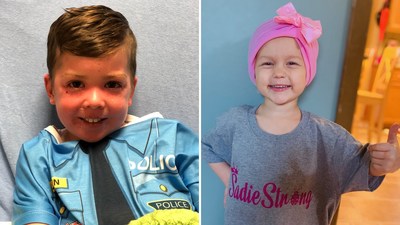 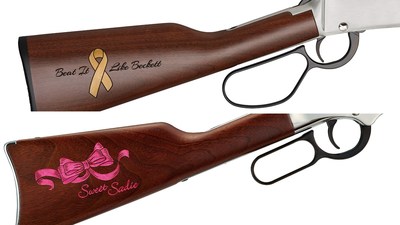 After a photo of Beckett Burge and his supportive sister went viral, Imperato reached out to offer assistance through Henry's Guns For Great Causes program, a charitable branch of the company that focuses on helping sick children, children's hospitals, veterans' organizations, 2nd Amendment, shooting sports, and wildlife conservation organizations. The "Beat It Like Beckett" edition rifle showcased an engraved and handpainted gold ribbon on the buttstock, the symbol of childhood cancer awareness.

A few months after Sadie Kreinbrink was diagnosed with Embryonal Rhabdomyosarcoma, a malignant childhood tumor requiring 66 weeks of chemotherapy treatment, Sadie's mother reached out to Henry Repeating Arms, and the "Sweet Sadie" edition rifle was born. The custom Golden Boy Silver Youth rifle displays a bright pink ribbon on the buttstock, which is Sadie's favorite color.

Baron Engraving of Trumbull, CT, donated their engraving and design services for both rifles.

Henry President and owner, Anthony Imperato, says, "We are so thrilled with our fans and everyone that chose to support the Kreinbrink and Burge family by purchasing one of these rifles. It's initiatives like this that have the potential to show the media and the rest of the world how great of an industry our firearms industry is." He continues, "Firearms manufacturers tend to get a black eye by the media more often than not, so this along with all of our other Guns For Great Causes campaigns should go to show all the good we can do."

Henry firearms can only be purchased through a licensed firearms dealer. For more information about Henry Repeating Arms and its products, visit henryusa.com or call 866-200-2354.

About Henry Repeating Arms:Henry Repeating Arms is one of the leading rifle and shotgun manufacturers in the United States and a world leader in the lever action category. The company motto is "Made in America, or not made at all" and its firearms come with a lifetime guarantee backed by award-winning customer service. The company is also known for its charitable endeavors under its Guns For Great Causes program, which focuses on sick children, both individual cases and children's hospitals, veteran and wounded veteran organizations, Second Amendment and wildlife conservation organizations. The company currently employs 535 people and has 250,000 square-feet of manufacturing space in its Rice Lake, Wisconsin and Bayonne, New Jersey facilities. The company is named in honor of Benjamin Tyler Henry who invented and patented the Henry rifle in 1860 – the first repeating rifle, the lever action rifle, which is America's unique contribution to international firearms design and is one of the most legendary, respected and sought after rifles in the history of firearms. Visit Henry Repeating Arms online at www.HenryUSA.com, on Facebook at www.Facebook.com/HenryRepeating, and on Instagram @Henry_Rifles.