PLANO, Texas, Feb. 25, 2021 /PRNewswire/ -- Today, Ruffles®, Official Chip of the NBA and one of the marquee brands from PepsiCo's Frito-Lay division, has launched an electric new campaign, Own Your Ridges™, featuring eight-time NBA All-Star, Anthony Davis. A brand famous for the ridges on its chips, the campaign is intended to inspire fans to unapologetically embrace what makes them unique — their "ridges." 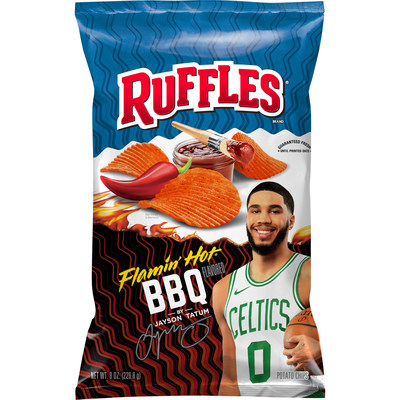 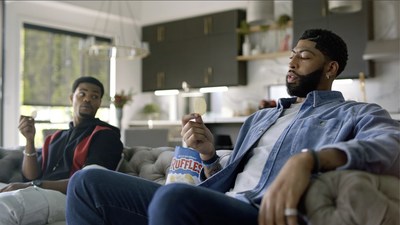 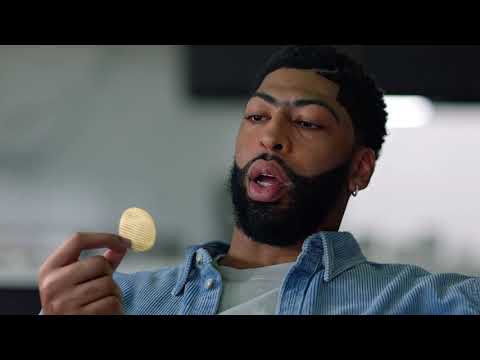 Davis will star in two new commercials for Ruffles, the brand's first new TV campaign in almost a decade, along with a special cameo from renowned artist and producer, T-Pain. The hilarious spots will pose questions like: What would Ruffles be like without their ridges? and What would a coach be like without the will to win? Viewers will also see a comical take on what T-Pain would sound like without Auto-Tune®— and Davis surprised to hear the high octaves the GRAMMY Award-winning artist can hit. Each of these scenarios reveal that they wouldn't be the same without these distinct qualities, or their ridges. The first commercial [see here] is set to air during the NBA All-Star Game on Sunday, March 7 on TNT, followed by the second commercial airing during The GRAMMY Awards on Sunday, March 14 on CBS.

As part of this campaign, Ruffles is also teaming up with individuals who live their originality out loud, including Jayson Tatum, the latest NBA All-Star to score a Chip Deal with Ruffles. As a part of the program, Ruffles has released a signature flavor with Tatum: Ruffles Flamin' Hot BBQ — a flavor reminiscent of his childhood in St. Louis, a town known for its spicy, BBQ flavor. This new product is the first time any Frito-Lay snack has combined the rich, tangy BBQ flavor with its immensely popular Flamin' Hot kick, creating Ruffles' most dynamic flavor yet.

"I'm so excited to be a part of a campaign that encourages people to embrace all the unique parts of themselves," said Tatum. "Growing up in St. Louis, bold and spicy barbeque flavors were a staple for me, so bringing that heat to my favorite snack is incredible to see – and taste."

This isn't the first time Ruffles has collaborated with an NBA All-Star to release a groundbreaking flavor. Last year, Ruffles debuted its inaugural Chip Deal with Davis that included the launch of Ruffles Lime & Jalapeño and a Ruffles-inspired signature shoe, The Ruffles Ridge Tops. Now Tatum will join Davis to bring new and unique flavors to the chip aisle.

"We're thrilled to launch Own Your Ridges which is meant to inspire our fans to own all the things about them that 'zig' when everyone else 'zags,'" said Stacy Taffet, vice president of marketing, Frito-Lay North America. "In partnership with Anthony Davis and Jayson Tatum, who are stellar examples of how to successfully live one's individuality out loud, we want to offer a platform for our fans to find power in their uniqueness. Because nothing is more magnetic than showing up as authentically you."

Ruffles is also launching its 'Ridge Awards' on social media, an opportunity for fans to recognize the people in their lives who have a lot of flavor — their friends, family, or even themselves by embracing their unique, quirky and distinctive "ridges." It's an award that isn't focused on being the best, but being you. Starting on March 14, Ruffles followers on Instagram will have access to a custom Augmented Reality filter to hold up their own "Ridge Award" and share how they own their ridges.

Tatum's signature Ruffles Flamin' Hot BBQ is available now at most retailers nationwide for $4.29 (8 oz. multi-serve) and $1.99 (2.5 oz. single-serve). Fans are encouraged to join the Own Your Ridges campaign by following Ruffles across social media: Twitter, Facebook, YouTube and Instagram. For more information, please visit Ruffles.com.

About RufflesRuffles is one of many Frito-Lay North America brands – the $17 billion convenient foods division of PepsiCo, Inc. (NASDAQ: PEP), which is headquartered in Purchase, NY. Learn more about Frito-Lay at the corporate website, http://www.fritolay.com/, the Snack Chat blog, http://www.snacks.com/ and on Twitter http://www.twitter.com/fritolay.

About PepsiCoPepsiCo products are enjoyed by consumers more than one billion times a day in more than 200 countries and territories around the world. PepsiCo generated more than $67 billion in net revenue in 2019, driven by a complementary food and beverage portfolio that includes Frito-Lay, Gatorade, Pepsi-Cola, Quaker and Tropicana. PepsiCo's product portfolio includes a wide range of enjoyable foods and beverages, including 23 brands that generate more than $1 billion each in estimated annual retail sales.