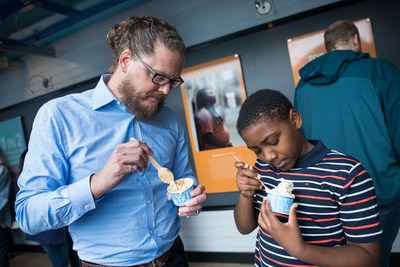 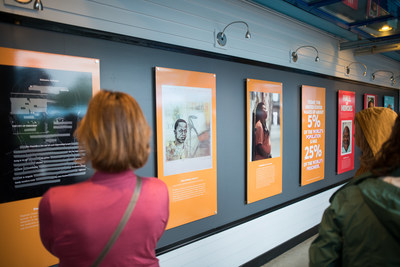 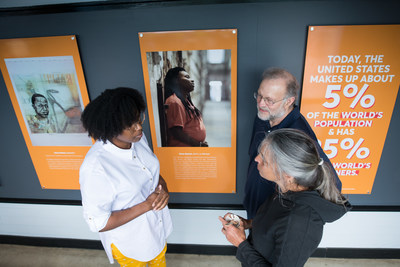 With 5% of the world's population, and 25% of the world's prison population, the criminal justice system in the United States is what author Paul Brakke refers to as "a national shame." Addressing that issue and advocating for criminal justice reform is the focus of a three-year effort by the iconic ice cream maker, who proudly unveiled a new art installation at its Waterbury, Vermont factory tour site today.

To highlight the need for criminal justice reform, the exhibit features artwork by Jesse Krimes, Russell Craig, Reginald Dwayne Betts, Mary Baxter and other artists who have first-hand experience with incarceration and are now working to improve our criminal justice system. The display is featured at the entrance to the ice cream factory, which hosts approximately 400,000 annual visitors, making it one of Vermont's most popular tourist destinations. The exhibit was launched in conjunction with the Art for Justice Fund in front of fans, visitors, employees and those committed to seeing a systemic change in the way state and federal authorities approach the use of jail and bail in the penal system.

"Ben & Jerry's is taking action on the issue of criminal justice reform, actively working with NGO partners and in league with a growing number of companies, to learn how we can best make a positive impact," said Ben & Jerry's CEO Matthew McCarthy, "Collectively we call out the tremendous disparity between spending 260 million dollars and the fact that those impacted individuals and communities are no better off." The CEO noted that the company is pursuing an "invest/divest" approach that would redirect money from jails and prisons and put it toward programs that make communities safer, such as more mental health counselors, substance abuse programs, and job training. This approach is called "front end" criminal justice reform and is part of Ben & Jerry's overall strategy.

So far in 2019, the company has worked with Color of Change to fight for reforms including ending cash bail, stopping unnecessary prosecutions and disrupting the school-to-prison pipeline. Ben & Jerry's has also worked with the ACLU, scooping ice cream at over a dozen cities as part of a national "People Not Prisons" tour from L.A. to D.C., addressing mass incarceration. The company is actively campaigning in St. Louis, MO to help close The Workhouse jail and end cash bail, in partnership with the Advancement Project National Office and local organizations. After unveiling the artwork, attendees enjoyed an ice cream social hearing from the attending artists, interactive art projects such as protest sign and button making, as well as music by artist DJ Rimarkable.